Jon Rahm explains dreadful putt: "I've seen so many things from a foot"

Jon Rahm describes his bizarre putt at the seventh hole during the first round at Bay Hill when he missed from all of 11 inches. 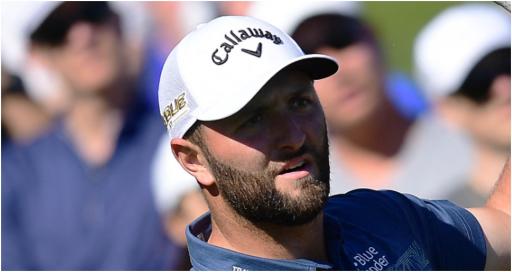 Jon Rahm knew he wasn't going to escape his press conference after his first round at Bay Hill without being asked one thing.

Yes, we are talking about that putt he missed from 11 inches at the Arnold Palmer Invitational. The world number one left us all befuddled.

Rahm, 27, who will become a dad for the second time, had a bit of trouble at the par-3 seventh hole when he was going to tap in for par.

But instead, he missed perhaps the shortest putt in PGA Tour history. His miss was in keeping with how he must be feelings on the greens of late.

Has that putt ever happened to Rahm before?  "I know. I figured somebody was going to ask," Rahm told reporters afterwards.

"I really couldn't tell you. I wish I could give you all the excuses in the world, but no, it's as simple as -- you know, it just didn't feel good in my hands, and I tried to stop, and I didn't. I just simply didn't stop. I don't know. It was very odd.

"It's not like it affected my play the rest of the day because I played really good. But sitting at 1-under I feel like would feel a lot better than even par. It just sucks to give that one away."

Rahm explained that he did in fact try and stop the stroke, adding: "It didn't sit well in my hands. I was a little sweaty."

"I've seen many things. I've seen from the putter get a little stuck on a blade of grass on the way back and do something funky, hit the ground before because you're not paying attention.

"I've seen so many things from a foot. I've seen some of the best putters in the world miss it because you don't really take a proper stance. It sucks to give away a shot like that, to be honest."

Rahm ended up shooting a level par 72 opening round. He is making his debut at this tournament. Rory McIlroy led after day one.