Dylan Frittelli teed it up on the driving range in a spot that was forbidden to play from for a special reason at the Arnold Palmer Invitational. 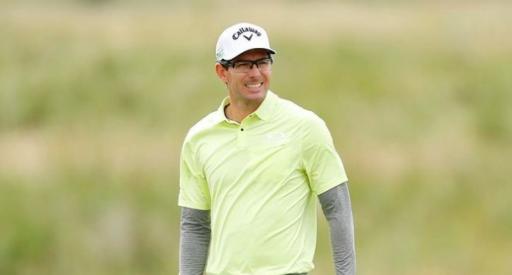 Dylan Frittelli has broken a special rule for the second consecutive year at the Arnold Palmer Invitational.

As reported by Daniel Rapaport on Twitter, Frittelli teed it up on the driving range in a special place that is kept empty with Bay Hill's famous umbrella and a name tag of 'Palmer' underneath.

Watch: Matt Jones LAUNCHES PUTTER IN THE LAKE in epic strop at the Arnold Palmer Invitational

This spot is supposedly a place where the legendary Arnold Palmer used to sit and watch the competitors at the event he hosted before his death in 2016.

As Rapaport says on Twitter, a "golfing felony" had been committed, but it was not the first time that Frittelli had committed such a crime.

Rapaport tweeted to say that the South African has now made the same mistake in consecutive years and hit balls from Arnie's famous spot in 2021 too.

Frittelli, who won the John Deere Classic in 2019, lept to his own defence and replied to Rapaport, saying: "I’m sure Arnie would’ve let me hit some balls from his spot while he ate lunch or went to play 9 holes."

One golf fan responded to Frittelli: "Walks up… “so weird that this spot is always available," to which Frittelli responded to say, "My thought exactly."

It is fair to say the 31-year-old meant no disrespect at all by using this part of the range and that it was just a mistake. He did also tweet to say that while making his third appearance at Bay Hill, no one had actually told him this spot wasn't meant to be used.

Despite one golf fan predicting that Frittelli would miss the cut as a result of his "felony," the two-time DP World Tour winner played solidly on Thursday and shot 2-under-par.

Next Page: This is why Adam Scott isn't using a driver at the Arnold Palmer Invitational...