The account thought to be from a member of Patrick Reed's camp has suggested the PGA Tour's player impact program is not what it seems. 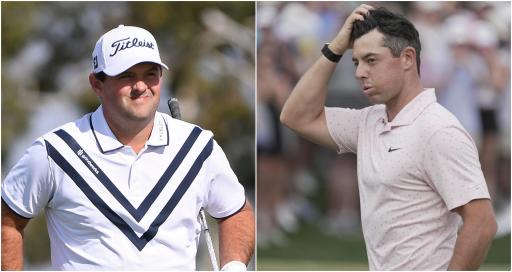 Cast your mind back a few months and you may remember an Eddie Pepperell tweet about Patrick Reed.

It was 27 October 2021 and Pepperell said: "Wasn't expecting this today". He was referring to a response he had made about Reed "cheating".

An account, by the moniker @usGolfFACTS, sensationally claimed that footage of Reed at the 2019 Hero World Open was digitally altered.

This was after memorably he was given a two-stroke penalty for moving the sand behind his ball with his wedge in a waste area in Albany.

We all know what followed. Reed defended himself. He was embroiled in another rules controversy at Farmers en route to victory.

What many people in the golf world believe is that this account is in some way linked to the Reed camp.

There are murmerings that the account is run by Reed's wife Justine, but this is just pure speculation.

More: How the "cheating" saga was revisited

Many episodes… No. “The Sand” incident- An expert forensic videographer broke that down... Altered footage from a copy of LIVE broadcast…from his actual shot to the shot shown in replays- basically DIGITALLY ALTERED to publicly smear and cause damages to PREED. pic.twitter.com/pvNuVVehAr

We should say that Reed has not publicly commented on this. But the depth of the "investigation" shows this account is very much pro-Reed.

Now, this account has made another stunning accusation: that the PGA Tour's player impact program is not all what it seems.

Tiger Woods won the inaugral PIP, edging out PIPhil Mickelson who previously claimed he had won it.

Woods won $8million for having the biggest impact on the game last year. Then he burned Mickelson and will probably win it again.

Critics have suggested the program is as a direct response to emerging rival leagues and is just a slush fund to keep the top players happy.

This is what the pro-Reed account had to say:

IMO- The “PIP” program was created and leaked by the PGA Tour in an attempt to publicly legitimize what they have been doing behind closed doors for years… paying certain players MILLIONS taking care of “their boys”. Check out their 501 (c) 6 tax record most are all on there. https://t.co/uCu3Eebsuq

The CBS golf reporter Kyle Porter also picked up on some of McIlroy's comments this week.

And from there things got a bit spicier:

Rory got steep on the PGA Tour as a business today, and it's difficult to not compare his answer to Phil's rhetoric from the last few weeks. Of note: If anyone is currently underpaid by the Tour (other than Tiger and Phil), it's Rory. pic.twitter.com/7BhUEwrHjj

Rory has been getting paid by the tour off-course MILLIONS ovr the last 4 years! Maybe, even more being the Chairman of the PAC…which in business ethics- is supposed to be a “reasonable” amt is payed… there is nothing reasonable abt paying PAC members millions in compensation

so are you -- as a person that has been closely linked with another player -- officially accusing a 501c6 of having been engaged in an off-the-books (and presumably highly illegal) financial relationship with one of its highest-profile contractors for the past several years?

Haha! Who said anything about being Off the books!!!?? You have been twisting headlines to make money off of players for years. Maybe section 230 reform will stop all of that and you will see justice for all the people you’ve hurt and all the people you mislead with your work.

Right, okay. So try and explain this to someone who doesn't follow golf?

Next page: Rory McIlroy says he "got a little bit lax" on this