Watch Donald Trump fire EXPLETIVES about his own golf course!

Donald Trump is not a fan of one of the holes at his own golf course... 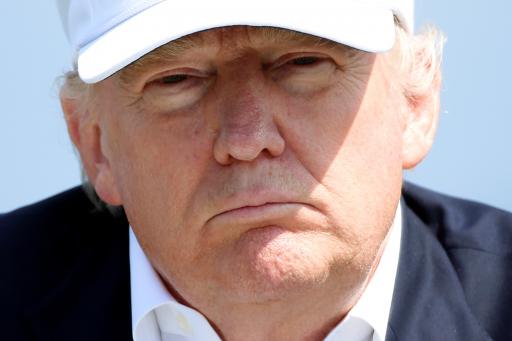 Just weeks after losing the US Presidential Election, Donald Trump was caught berating one of the holes on his OWN golf course last week.

Trump, who was teeing it up on his own golf course in Virigina just before his Thanksgiving dinner, was overheard shouting: "I hate the f****** hole!" following an errant tee shot. Watch the video below:

I mean, it is your own golf course Donald. You could change the design of the hole if you really don't like it that much?!

Trump has recently confirmed he will leave the White House providing the Electoral College, as expected, confirms Joe Biden as the winner of the 2020 election.

Before the 2020 US Presidential Election had been decided, it was reported on Golf News Net that Trump had played a total of 294 times in his position as US President.

GNN states: "Donald Trump paid a visit to Trump National Golf Club in Potomac Falls, Va. on Nov. 7, representing the 292nd time the 45th President has visited one of his 17 golf clubs (and, for most of them, presumably played some golf) since becoming President on Jan. 20, 2017. He has now paid 294 visits to any golf course as President."

"Trump arrived to his D.C.-area golf club on Saturday just after 10 a.m. Trump spent the morning tweeting that he was still alive in a legal fight to undermine the results of the Presidential election.

"While Trump was on the course, major news networks started calling the election for Joe Biden, projecting he will become the 46th President of the United States.

"Trump prefers to play golf in the mornings, while the Secret Service follows around Trump in golf carts that, so far, have cost American taxpayers nearly $765,000 to use. He claims to have a USGA handicap index under 5, but he is thought to have a vanity handicap that makes him seem better at the sport than he is.

"The Secret Service has spent over $950,000 to stay overnight at Trump-owned properties, including his New Jersey country club."