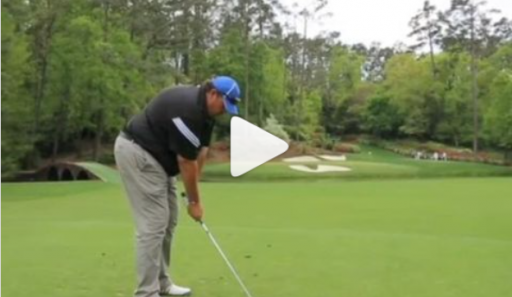 It's a tee shot we'd all like to have but sadly the moment will probably never arrive.

Imagine waiting your whole life to peg it up there and having the shanks.

Such was the fate of one golfer who hit a beautiful hosel rocket on the famous 12th hole named Golden Bell.

It's only 155 yards but it can be the stuff of nightmares thanks to its swirling winds, narrow green and yes - the water.

It has thwarted many Masters runs over the years.

Tiger Woods famously made a 10 on the hole at the 2020 Masters after finding the water three times.

Jordan Spieth also chunked it into the lake during one charge.

While Francesco Molinari and Tony Finau also were victims of finding the water down the stretch.

Woods famously recovered and birdied in to finish the week under par after recording his worst ever score on a hole.

This golfer's reaction was pretty hilarious as he turned to the camera and yelled: 'Shank!'.

His caddie seemed nonplussed with the shot.

The player in question was purportedly a member of the media who won a lottery.

The clip has been doing the rounds and although he didn't appear to lose a golf ball it may have lost a bit of pride.

NEXT PAGE: WHO IS JON RAHM'S WIFE KELLEY CAHILL?