WATCH: Golfer gets a nasty bump on his head after being hit by a golf ball!

Luckily he was saw the funny side, but that's a seriously nasty bump on the head! 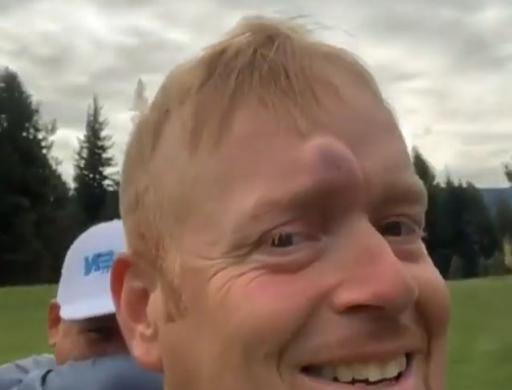 Golf fans have reacted to a viral video on social media of a golfer showing off a nasty bump on his head after he was struck by a golf ball.

If you've been hit by a golf ball before then you'll be fully aware that it can be pretty painful and in some cases - like the one you're about to see - fairly dangerous.

Personally, I've been struck by a ball on two occassions and thankfully neither of them hit me on the head. The first happened when I was pretty young playing golf with my Dad and when a ball came flying towards us, he picked me up in an attempt to get me out of the way, but instead put me right in the firing line as the ball struck my leg. Thinking about it, maybe he was using me as a shield and lied about trying to get me out of harm's way...

The second time was when I was playing golf with a friend in my teens and although he was and still is a solid golfer, he managed to shank an iron shot straight at me and without warning, but I waled away with a little bruise on the arm. No big deal.

But for the golfer in this video, it looks like he's lucky to still be conscious...

WATCH THE GOLFER'S REACTION TO BEING HIT BY A BALL BELOW:

Thankfully the man saw the funny side and had a good laugh about the big lump on his head, whilst golf fans flooded the comments section in reaction to the video and told their own stories about being injured on the golf course.

"Got hit by a driver when I was a kid standing too close, I didn't feel it, just saw a white flash and then woke up."

"Day before I got married. I was hit in the chest walking done the fairway, no call. Pulled out my wood and hit it right back at em. Best most accurate shot I’ve ever hit.."

"Best reaction from his friend!! Who tries to hide his laugh!"