WATCH: Golfer plays the most CREATIVE SHOT we have seen all year!

Take a bow, sir. One of the most creative short-game shots we have ever seen! 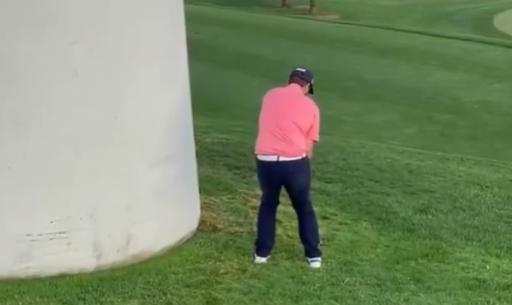 Some of you may remember Miguel Angel Jimenez once played one of the most remarkable shots in major history off a stone wall at the back of the 17th hole during the 2010 Open Championship at St Andrews.

With no option other than to play the shot - otherwise take an unplayble under penalty - Jimenez stepped, slammed his ball against the wall, up over his shoulder and onto the green.

"There was no place to drop it. I took out my sand wedge and hoped to get a good break but I had no idea how it would turn out as you can’t practise that sort of shot!" said Jimenez.

Fast forward to the present day, and a golfer has taken to social media over the weekend to show off a similarly impressive effort on the 18th hole at Moccasin Run in Pennsylvania.

With his ball a couple of feet away from a tall white block behind the green, and his swing impeded, the golfer decided to play his ball Jimenez-style up against the wall, over his shoulder and onto the green to some 10 feet.

WATCH THE IMPRESSIVE SHOT BELOW

We can't be certain if he holed the putt, but we will give him the benefit of doubt that he drained it for an outrageous scramble (let's hope it was for par!)