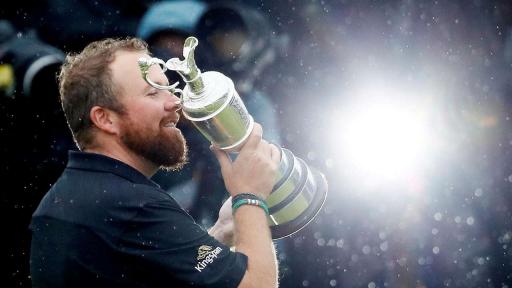 Shane Lowry holed the winning putt for a six-stroke victory at The Open, lifted the Claret Jug, said a few words, and then headed straight to Dublin to party long into the night.

Check out this hilarious video of Lowry up on the stage in front of his adoring Irish fans while lifting the Claret Jug with his cap back to front...

Shane Lowry might be the drunkest person in the world right now pic.twitter.com/dVgQy5JTXV

While Lowry was sober earlier in the day, he put the finishing touches to his first major title with a dominant six-stroke victory on 15-under par at Royal Portrush.

Speaking (while still sober) after being presented with the Claret Jug on the 18th green, Lowry said: "What can I say? I just have so many people to thank, first of all the R&A for such a great event.

"To have an Open here on the island of Ireland and at Royal Portrush is amazing. I love this place and to be able to come here and play an Open was great.

"A lot of people in my backroom team: my coach Neil (Manchip), my caddie Bo, my management team - I definitely wouldn't be standing here without them."

Lowry fought back tears as he mentioned his parents, adding: "They sacrificed so much for me when I was younger and I'm so happy that I can hand them this trophy tonight.

"My wife and my little girl, to have them here today is just extra special. Last but not least the volunteers and all the fans, thank you so much, this one's for you."

The win comes a year after sacking his caddie after the first round of last year's Open en route to missing the cut for a fourth year in succession.

For Lowry, it marks a sense of redemption having blown his chance of winning the US Open three years ago.

Lowry had started the final round of that tournament with a four-stroke lead but his round of 76 saw him pipped to the line by Dustin Johnson.