Jordan Spieth and Patrick Reed hug it out on the first tee during the Farmers Insurance Open. 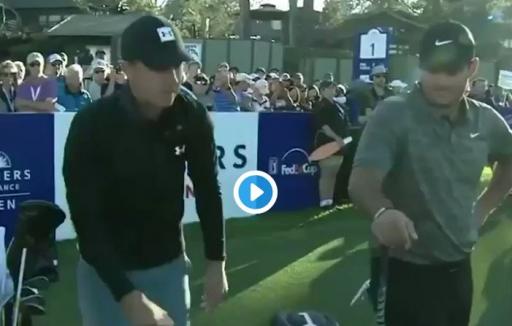 Reed made the headlines after the Ryder Cup when he had a pop at Jordan Spieth for not pairing with him, saying that his ego got in the way during Team USA's defeat to Europe, but it seems the pair have left the past in the past.

The two were paired together for Saturday's third round of the Farmers Insurance Open in San Diego and many were expecting some tension when the two greeted eachother, but that certainly wasn't the case.

Spieth went straight in for a hug with Reed and the crowd went wild as the two warmly embraced eachother and laughed it off. After the round, Spieth was asked about the first-tee hug and he explained it was sarcasm more than anything.

“I laughed. I think he did, too,” said Spieth. “It was more kind of sarcasm towards them (the media). That was kind of, just, we knew the cameras were on and we knew people were interested in that, so I just thought it would be kind of funny.”

Despite Reed's comments after the Ryder Cup, Reed said that nothing had come between the two and that they had remained friends.

“Literally when we got off the plane it was old news and we all moved on from there, so not really,” Reed said. “I mean, it’s really nothing. Jordan and I, we’ve moved on. We’re now just out here trying to play some good golf and trying to feed off of each other as well as just trying to go out and shoot low numbers. Jordan and I are still really good friends."

Watch the video below as the two Americans hug it out.

Features
Danny Willett: The son of a vicar who lacked belief is back where he belongs
Ryder Cup
REVEALED: The biggest earners from the Ryder Cup on Instagram
Ryder Cup
Jordan Spieth's Ryder Cup putter STROP - We can all relate to this!
Ryder Cup
Ryder Cup 2020 VERDICT: "This is the GREATEST US Ryder Cup side of all time"
Ryder Cup
Does the Ryder Cup prove that golf hoodies are here to stay?