At least he'll no doubt make some money out of it! 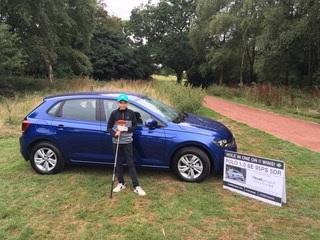 Sonny Priestley with the car he won (photo: Russell Adams)

It's every golfer's wildest dream... a hole-in-one, especially one that wins you a car. It just kind of helps if you're old enough to be able to drive it...

That's exactly what happened to 11-year-old Sonny Priestly at Hadzor's Gaudet Luce Golf Club in Worcestershire during an 84-participant event in aid of Cancer Research.

Priestly, a 28-handicapper, stepped up to the 175-yard par-3 11th hole and striped a tee shot that clanked off the pin and in for an ace. Delighted with his efforts, Priestly “dropped his club and ran off down the fairway with everyone chasing him,” according to the Worcester News.

The 11th hole was also insured as the day’s featured hole, meaning Priestly’s ace won him a VW Polo.

Unfortunately for Sonny, he's still some way off being able to jump into his new set of wheels. No doubt he will make a bit of cash out of it though, unless he's currently in the doghouse with his parents of course.

Previous
How Tiger Woods can win the FedEx Cup this week...
Next
Things we NEVER realised in January 2018 we'd be saying in September!