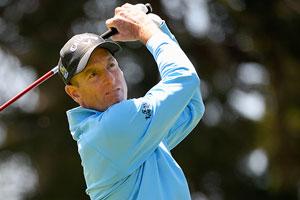 Jim Furyk's swing has been described as "an octopus falling out of a tree", but much can be learned from the American's unique style, says Carl Watts of Mannings Heath Golf Club.

1. Furyk has an unorthodox set-up. He’s quite hunched, he sits back a little bit and his hands are very low.

The only coach he’s ever had is his father Mike, and his key message when Jim was growing up was he didn’t want to change anything that was natural or comfortable, he would rather him be relaxed and chilled at address. Right from the off his philosophy was different.

It’s not necessarily a bad thing – after all he’s fourth on the all-time money list – it’s just understanding how his set-up influences the downswing.

If you look at someone like Tiger, the lines look immaculate but it looks like there’s an element of tension compared to Furyk. Like Spieth’s left bent arm at impact - it’s unorthodox but very relaxed.

2. Because of the set-up there’s only one way this club's going to go and that’s vertical. The first move away is quite straightforward, it’s a one-piece takeaway – that club is on plane. Most amateurs would be whipping that club inside.

3. Now the club is slightly behind him but it’s minimal. The clubface is still pointing at the ball, unlike most amateurs whose clubface would be wide open. Up to this point he is really quite orthodox in terms of his lines.

4. Here’s where it becomes a Jim Furyk signature move. If you look at the grip end of the club, it's pointing at his feet, and he’s gone very steep. Most players would have the shaft line pointing at the ball.

The set-up has influenced the move because standing so close to the ball at address means he can’t swing around and has to go up to get out the way.

5. You’ll see the hands very high at the top, more over the middle of his chest while most players would have their hands behind them. It looks like he’s sitting back which means the top half of his body is more vertical.

His backswing is perceived to be very unorthodox and that all comes from his set-up. It doesn’t mean he needs to change anything, he just needs to be aware of it.

It's the same for amateurs. If someone is telling you “you’re swinging too steep or too flat”, you may not need to change as that may be ideal for you.

6. Here’s the big transition and it’s where he goes from unorthodox to sheer genius. In the previous frame he is high and across the line, and in one move he has shallowed out the downswing and dropped the club behind him.

He’s rotating the hips to provide room for himself, and all this movement is the reason he gets called "Jelly Legs". If you look at the end of the club it’s pointing at the ball-to-target line so he’s back into an orthodox position. It’s not a move built on timing, which you would perceive it to be, it’s actually just amazing positions.

7. Talk about being on plane - the club is flush on the ball line and he’s creating an awful lot of room. You can see how much he opens up and he looks really orthodox.

It shows that the most important part of the swing is the downswing – it’s irrelevant what you do beforehand if you can counter it with a move like this.

8. His hips are flush at the target and his clubface is uber square. His right arm is tucked slightly behind him which will control rotation.

He has a one-plane downswing, and a two-plane backswing – he’s like a "hybrid" of moves. Ian Poulter and Colin Montgomerie have two-plane swings, while Tiger Woods and Rory McIlroy are one-plane swingers. On the way back he’s like Poulter, on the way through he’s Rory.

9. On the through swing, everything is massively open to the target. You can see the clubface isn’t wrapped over, which is common among amateurs. He has no rotation of the arms, which means he can hit the ball as hard as he wants and he won’t hook.

He rotates his hips and chest a lot to prevent the club flipping.

10. On the way through it’s very orthodox. The club end is pointing at the tee where the ball was – you wouldn’t be calling him Jelly Legs now.

We can see the sole of his right shoe which tells us he’s really opening up and rotating – most amateurs you won’t see any of that sole, if anything the right knee would have popped towards the ball.

What I tend to do with amateurs is work with a clock face image – I’ll get them to swing to nine o’clock on the backswing and 12 o’clock on the throughswing.

Furyk proves there’s no right or wrong way to do it, it’s understanding your own move. Before completely changing your swing just think “do I really need to or is there a simpler answer”?