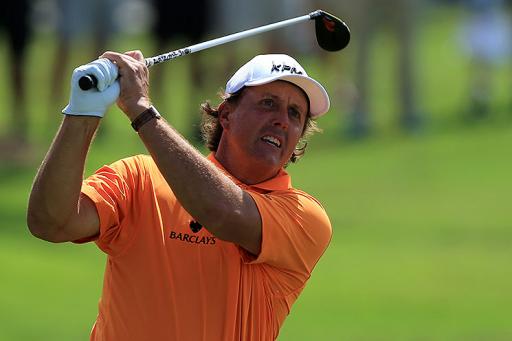 Phil Mickelson's swing relies a lot on timing, but when it is in synch, it is superb, says PGA coach Dan Whittaker.

1. Phil is in an ideal address position with the weight balanced evenly across his feet and the arms hanging down from his shoulders. He is also aiming slightly left of the target this will fit perfectly with his ball flight - a slight draw.

2. The first move away from the ball here is ideal, the arms the body and the club are all working away as a single unit and the clubface is perpendicular to the arc and parallel to the spine. The hips and shoulders are rotating away together, creating a classic one-piece takeaway. You could copy this move by putting the club into your belly button and making a turn away from the ball.

3. Note how the clubface is very neutral and is just beginning to gradually open, the hips are rotating and the weight is beginning to move into his right heel highlighted by the act that his left leg is slightly losing flex.

4. The clubface is starting to open up relative to the arc and Phil sets the club very late in the backswing. This aids the amount of lag we see him generate on the way down. At this stage the arms, body and club are in synch.

5. The arms and club have travelled a lot further than Phil’s turn here in this photo and the effects this has on the swing will be seen later on. The overswing is a killer for a lot of amateurs as the arms, body and club are not in synch. The body has to slow down and the arms speed up in the downswing in order to deliver the club to the ball. Timing becomes crucial, making it difficult to achieve consistency. This is a problem in Phil’s swing with the driver as he can be hit and miss. However, the clubface is in perfect alignment with the right arm which is something we should all aim for.

6. Notice how the clubhead has travelled a short distance relative to the amount the body is beginning to unwind. He is really getting ready to pour on the power. The right arm is still across the level of the shoulders and in a very powerful position to deliver the club from the inside.

7. If a picture can show stored power then this is it. The legs are squatting as he is using the ground to create pressure. The effect of the late setting of the club in the backswing and the excellent sequencing in the transition are noted here as the club almost appears to be resting on Phil’s left shoulder and the two have worked together to help generate huge amounts of lag.

8. From having the right arm across the shoulders two frames earlier Phil has now got it off his body and created tons of room for his arms to deliver the club into the ball. He is not pushing up from his left foot too early and is still exerting pressure through the floor. The space he has created for his left arm in front of his left hip is key.

9. Phil has both his upper and lower body open similar amounts here at impact and the arms have extended to deliver the club to the ball.

10. The chase we see from the left arm here and the extreme closure rate in the clubface are as a direct result of his arms having to work quicker to catch up with his body due to the over swing at the top of the backswing. This has a direct effect on how much the body has opened between here and the previous picture and causes him to be pulled upwards on his left toe and loose his tush line.

11. A by-product of the footwork and the chase can be seen here as the left side of Phil’s body is working down a bit too much and the club is exiting his body higher. Despite this the club shaft, face and the shoulders are in perfect alignment. The collapse is just due to the extra throw out forces in the clubhead which can be traced back to the overswing at the top.

12. Phil has more of a slightly hung back finish to his driver. But he has the weight in the heel of his right leg and the body pointing well right of the target - an image many should aim to copy.