'Imaginary line in the sand is the secret to consistency' 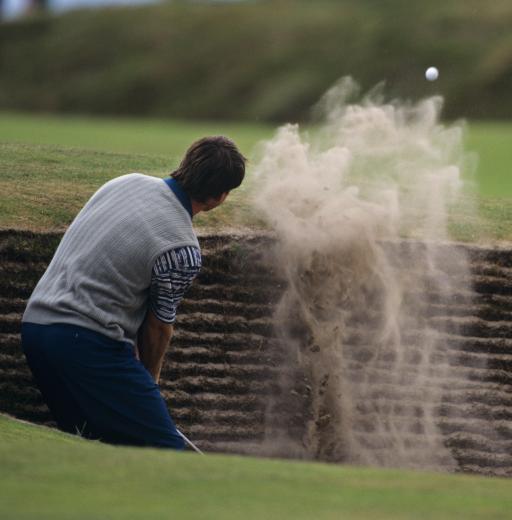 Six-time Major-winner and record Ryder Cup points-scorer, Sir Nick Faldo, reveals the secrets of a short-game that made him a World No.1.

Tour pros love bunker shots, amateurs hate them. But there’s no reason why you should. A simple way to gain confidence is to get in the practice bunker at your local course and draw a line in the sand (between your feet) at right angles to your target. Then practise hitting the line. Just keep doing it and observe where you have to stand - anywhere from 10 -15 degrees open - in order to hit the line consistently.

If you’re not hitting the line, move your feet around things around until you do. Also experiment moving your weight (to the left or right), using your shoulders and arms and try it, too on upslopes and downslopes. Just practise finding the line; don’t even hit balls for a while. For a player of any level, moving around the line and hitting it is a great exercise. When you’re playing shots for real - and I tell the young players in the Faldo Series from time to time - imagine 'the line' is just behind your ball and you need to hit it.

Everyone plays bunker shots differently. Ernie Els uses a 'minimal stroke', he just opens up the face of his sand wedge, comes outside the line a little and pops the club under the ball with a lovely soft stroke. On the other hand, Phil Mickelson wants to hit a full stroke and thump it out. Find what works best for you.

The other option is to find a length of swing you like and keep it for every shot. If you then want to hit one shorter, open up the face. If you close the face and it goes further and runs out. Try both methods and find one you like.

WRIST ACTIONS: Breaking the wrists in the backswing or playing 'dead-armed' shot where you drop the hands in behind the ball makes a big difference. I used to have a ‘Seve’ shot where I’d really cup the wrists, have my legs wider apart, get down low and really whip under it. Swing with loads of speed and it goes very high. Play with no wrist break and it comes out lower with less spin and releases. Again, just experiment with different actions.

READING THE LIE: I once watched a clinic Gary Player gave using just four balls. One was in a perfect lie, one sat down a bit, one sat down even more, one was plugged. The idea was to play four shots, with the same swing, and land in the same place to see how each ball reacted. Do this a few times and you’ll be able to read the lie and understand what the ball can (and can’t) do. You can’t control everything, even pros can’t do much with a bad lie.

DIFFERENT CLUBS: Experimenting with different clubs is great fun. I used to use 9-iron loads of time for bunker shots, just to really make it pitch and run out . Sometimes you have a bunker shot to play which is well short of the green and it can be tough to carry it all the way to the green. Play a 9-iron, bump it out and it will keep on going.

Years ago I was at Bay Hill in Florida on the putting green, and on the other green Seve was hitting bunker shots. Just normal looking bunker shots. I wandered over and he was using a 3-iron. You couldn’t really tell which club he was using, he was just hitting them normally. I went back to my club after the tournament and practised using the same club.

Want anymore Nick Faldo tips? check out his guides to Pitching and Chipping.