Moves you can learn, swing thoughts you can copy, which set Casey on the road to big-hitting - with accuracy 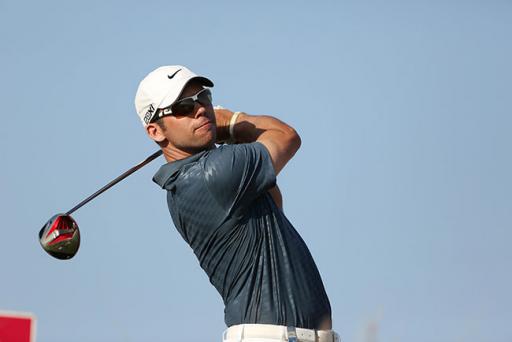 Shake his hand and you'll know immediately from where Paul Casey's prodigious length comes from. He hardly knows his own strength when he grips you and looks you in the eye but there's warmth in the greeting, too.

He's naturally strong with forearms you would want to contest in an arm-wrestling competition to save your life but since winning the English Amateur title in 2000, emerging at the top of the US college golf tree and making his European Tour debut in the Benson and Hedges International at The Belfry as an amateur, he has developed into a class act.

A multi-winner on Tour, the 36-year-old has been hounded by injury in recent years but is on the mend and it trying hard to get his game together.

The Nike staff player was rated by no less an authority than eight-times moneylist winner Colin Montgomerie as Britain's best chance of a major title before innjury struck.

"He's fantastic," says Monty, " The greatest asset in golf these days is length because none of the courses are getting shorter. Casey has tremendous power and if he can continue to control that, as he has shown at the back end of this year, then I think he will be the one to make the breakthrough."

Casey attributes much of his prodigious distance to a powerful, thick-set physique and his ability to make the most of his assets under the tutelage of his coach, Peter Kostis.

"In my early years on Tour, I wasn't getting in a position where I could attack the ball - not even when I won at Gleneagles in 2001. But after working with Peter, I've developed to having the club moving on a much better plane. I can release the clubhead properly and hit virtually any shot I want," he says.

Casey also has huge self belief and you can tell from his confident , jaunty march along the world's fairways that he knows he's where he belongs, at the very highest level.

He says his golf swing, which many youngsters should wish to copy starts from a solid, relaxed foundation.

It's athletic and poised for action - knees flexed, weight balanced over the balls of his feet with no hint of tension anywhere in his body. Check out the distinct angles in his spine as his arms hang naturally.

"Amateurs usually have too much tension in their body, arms and wrists at address and that prevents them from ever making a smooth, powerful swing, " says Casey, who ensures he lifts his chin up slightly to encourage a full shoulder turn.

"If you take a wood off the tee, your feet should be just wider than shoulder-width apart and the ball positioned forward of centre in your stance. Your grip should be as light as possible, while still keeping control of the club. This will promote a wide, full and rhythmic swing and ensure that you do not snatch at the shot."

Casey also says that it's important when practising, for him to literally measure the distance between the ball and his feet at address.

"Knowing exactly how far I should be standing from the ball helps me get back into the correct set-up position for every shot. After playing in the wind and rain and because of all the extra layers I wear, I sometimes find I stand four or five inches further from the ball than I normally would. But maintaining those measurements on the practice range has helped me to develop consistency."

Take away low and slow

When he first came on Tour, Casey reveals that his swing plane - pulling back too far on the inside, was preventin him from releasing the club the way he wanted to.

"I was fanning the face open a little and making a small loop at the top. Then I would sort of spin out of the shot at impact and come across the ball. As a result, I was hitting a nasty cut shot that usually finished short and right."

He solved the problem by placing a wooden board on the ground just outside the ball, and moving the clubhead away as close as possible to it to help me develop a better takeaway and create a better plane going back.

"I took some chunks out of the wood when I started using it, but my clubhead path gradually improved and now I'm in a much better position at the top and I have much more width in my swing. I can come into the back of the ball more powerfully, make a natural release and hit any shot I want."

In your take-away Casey also suggests:"Keep in your mind: 'low and slow.' If you pick up the club too quickly, it will cause you to chop across the ball at impact. Your arms and club should come away first without your shoulders moving from the address position.

A full coil is crucial

"I've always wanted to hit the ball as far as possible - even as a kid - and being naturally strong helps. But to do this you need to hit the ball squarely and time it right - synchronize the turn of your body with the movement of your arms.

"A full turn is crucial to powerful hitting, and this comes from your upper-body position at the top of the backswing. The equation is simple: the more you turn away from the target, the more torque you generate. It can feel like you are almost screwing yourself into the ground.

"You don't want to create a fake turn by just swinging with your arms and using too much wrist action. You will never hit the ball consistently that way. Think turn and coil and load yourself up like when you pull back a rubber band and let it go. Amateurs slice a lot because they have this urge to get back to the ball too soon. The swing isn't in sync. If you complete the backswing then come down smoothly you'll stop slicing."

Leg stability in the downswing

As for the downswing, he says, it's all about rhythm and tempo and not trying to rush it in your anxiety to get the clubhead to the ball.

"As you unwind into the ball, the energy forces your arms to move faster. Concentrate on great leg stability, giving your arms plenty of room swing down."

Swing through the target at impact

At impact the best players don't think about the hit - it's just about letting the ball get in the way of the clubhead.

"Aim to swing through the target for as long as possible. My club is basically swinging down the ball-to-target line from a point level with my hips on the backswing until the same point on the follow-through."

A golf swing is a combination of balance and co-ordination and the top drivers of the golf ball rarely topple over." The speed of the clubhead will pull you through after contact and you should finish the stroke with a perfectly balanced, high finish," says Casey, who finished second in total driving on the European Tour - a combination of a 298-yard average distance and 66 per-cent accuracy rating.