Mouland helps Shilton with his putting 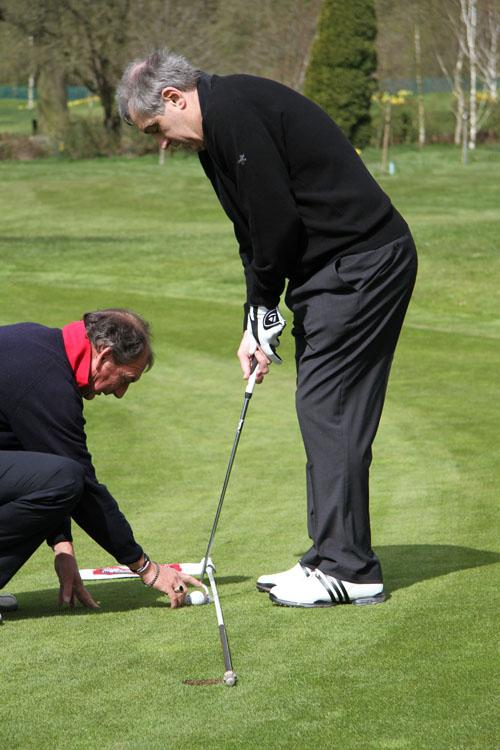 Golfmagic offered Peter Shilton, the former England, Nottingham Forest and Leicester goalkeeper, a series of lessons with former Welsh World Cup golfer Mark Mouland at the Nailcote Hall near Coventry which stages the Farmfoods British Par-3 Championship from August 10-13, when Peter will also be playing the pro-am.

How to keep putter head square through impact

Says Mark Mouland: "Watch the modern pros in slow motion and you'll notice that the putter head rarely strays from straight back to straight through in a pendulum motion. They practice for hours to maintain a consistent path to strike the ball within a millimetre of the same spot almost every time.

"Here's a useful practice drill I shared with Peter to improve his close range putting, which hopefully will improve his and your scoring on the greens."

The execution: "Lay your longest club (or a flagstick) on the practice green and practice putting to the hole so you can feel the heel of the putter gently scraping along the shaft in a straight line. This builds muscle memory and helps deliver the clubface squarely behind the ball.

After a while it will feel as if the putter head is on rails and will deliver a consistent repetitive stroke. You can achieve a similar sensation for shorter putts by laying two clubs parallel and side by side and keeping the putter head moving back and through without touching the sides. If either the heel or the toe touches the side you know the head is waving about and unlikey to give you a consistent stroke.

Says Shilton: "It's a simple but effective tip that all of us can try on the practice green. Putting is the simplest form of golf but also the most difficult to master. I'm sure if we all made time to practise this drill we'd knock loads off shots off our handicaps."