The fundamentals of putting

Perhaps the only putting lesson you will ever need!! 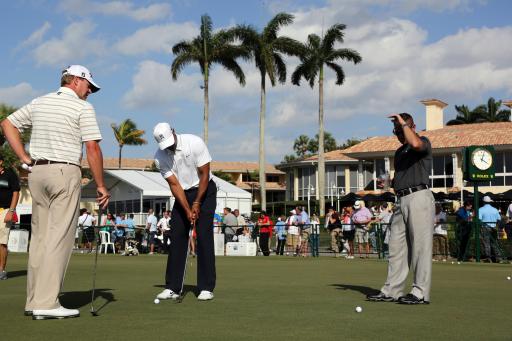 Get the set up right every time

There are three main variables responsible for inconsistent putting; the eyes, the hands and the ball, all of which can be eliminated with a systematic set-up.

The sternum is a very handy reference point. But try positioning the ball ahead of the sternum. It will help you to see the ball, your hands and the target all in the same frame. If you have a method of consistently addressing the ball in the same spot, you can eliminate another of the variables.

Opening your shoulders and stance a little isn't detrimental to the stroke. If you shift your pivot point from a central position to the right shoulder (right hander) what you are doing is turning your whole arm into a broomstick. It still functions as a pendulum but it's less difficult to co-ordinate and much easier to control.

Getting the right lie on your putter

The split-line alignment system is the most accurate and legal method that puts your eyes into the perfect position. This entails having two lines on your putter. Usually there is one on the top of the putter. If you add a second one when the putter is perfectly square to the ground, it gives you a lot of information about your putter's lie angle. By placing two pieces of tape in line with the original alignment aid on the putter, then marking it with white paint or tippex, you will know that every time you get the lines matched up, you have the putter at the perfect lie for you.

Because the hands control the position of the putter as it lies on the ground, by fixing the level of the putter you have just about locked the hands so they wont move around when you make a stroke.

Every putt is a straight putt. Imagine if you had a method to propel a ball down any given line as straight as if it had been fired by a gun, that's a straight putt technique. Here's how to do it:

The final element of a consistent hand position is the forward press. If you putt right-handed, use the back of your right hand as your guide. The back of your hand is flat and the putter face is also flat. If you putt with the back of the right hand ahead of the putter face, there are three immediate results. Firstly a forward press gives you a great strike, secondly, it's a built-in safety check for your swing path, thirdly, having your hands ahead locks them out of harms way.

It's only when your hands are in a neutral position that the club rests where it should and a forward press results in correct alignment.

The forward press is a double insurance policy. If your hands are in the correct position, and you press forward not only will the alignment point to the direction where the ball will start, it also points in the opposite direction to the path the putter will travel on the take away.

If you suffer from a loop in your stroke, try putting your hands in the right position in the set-up. Fix the problem before you putt because once you begin the stroke it's already too late.
By firstly rocking the hands to get the putter sitting flat and then confirming that position with a forward press you have fully eliminated the final variable and one of the biggest causes of inconsistent putting - changeable hands.

Take away - square to square and straight

The perfect take away should to be on line and square to the ball-target line, otherwise there's room to make errors.

If the putter is open on the way back it means that it must return to square at precisely the right time to propel the ball down the line. Alternatively, if you're square on the back swing, square at contact and square on the follow through you don't have to rely on perfect timing to get the ball to stay on line.

If you pick the putter up on the take away you inevitably have to drop it back down on the ball and any downward force on the ball causes it to bounce up off the putting surface. Once that happens no one can accurately predict how the ball will roll.

Through swing - The Monty move

There's a technique which lets you keep the putter square at all times through the stroke. I call it the Monty move because of all the tour players Colin Montgomerie comes closest to the technique naturally. The "Monty Move" is essentially a hinging of the right elbow (right handers) after impact while still maintaining the wrist angle that you began with.

If you can imagine what it looks like to roll a ball underarm like in lawn bowls, it makes the concept of square to square much easier to understand. If cricket is your game, imagine playing a forward defensive shot to a rising ball and you'll be able to associate the same locked right wrist sensation that stops you spooning a catch.

After the forward press remember to lock the right wrist as if it were set in a plaster cast. Take everything away in one piece but at the point in the through swing when the right bicep reaches vertical (with your elbow pointing at the ground), it remains in that position. The right elbow hinges and allows the putter head to continue square along the ball-target line.

The relationship between distance, the putter and the ball

When your set-up is correct and your straight putt technique is sound you begin to look for a method to master the inch-perfect challenge of the Boomerang. Knowing everything that there is to know about a straight putt won't get the ball in the hole on its own, you also need to get the pace right.

Both feel and touch come with good rhythm and good rhythm comes from training on the Boomerang. The straight putt technique keeps the ball on the Boomerang and coming back to your feet but it is rhythm that is the key to mastering the challenge. With the Boomerang, we are able to practice rhythm hundreds of times every hour - grooving a stroke like practising tennis against a brick wall.