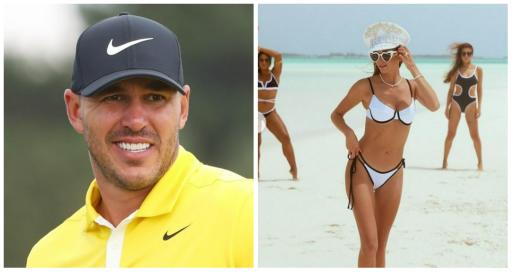 Brooks Koepka's wife Jena Sims appeared to be one of the first to break the bombshell news the LIV Golf Invitational Series is set to achieve world ranking points.

LIV Golf Bangkok is set to be the first event the players competing in the breakaway Tour, funded by Saudi Arabia's Public Investment Fund, can start earning points.

This would allow players - such as Koepka - to start qualifying for golf's four major championships unless they exempt.

As first reported by The Telegraph's Jamie Corrigan, LIV is heading towards a "strategic alliance" with the MENA Tour, which was founded in 2011 by the Shaikh Maktoum Golf Foundation, which is based in Dubai.

The shock news will obviously please the likes of Koepka and others such as Dustin Johnson and Bryson DeChambeau, who resigned their PGA Tour memberships so they can compete in the LIV Golf Tour.

DeChambeau, in particular, stated only a few weeks ago that he believed the issues between the PGA Tour and LIV Golf would be rectified swiftly.

World ranking points, or the lack of them, has proved to be a huge stumbling block so far for LIV.

As many as 50 of their players had signed a joint-letter to the chief executive of the Official World Golf Ranking, Peter Dawson, imploring the governing body to give LIV accreditation.

Koepka confirmed he had joined the LIV Golf Tour shortly before the PGA Tour's Travelers Championship.

Koepka, who married Jena in a lavish ceremony in the Caribbean in June, made his LIV debut in Portland, Oregon, at Pumkin Ridge Golf Club.

His reported fee for joining the Tour is said to have been in excess of $100m.

Koepka's signing, though at this point seems unsurprising, turned heads when he joined LIV as he previously stated on numerous occasions he would not be leaving the PGA Tour.