Brooks Koepka and Jena Sims are now happily married - but the LIV Golf star was given something of a surprise on their big day! 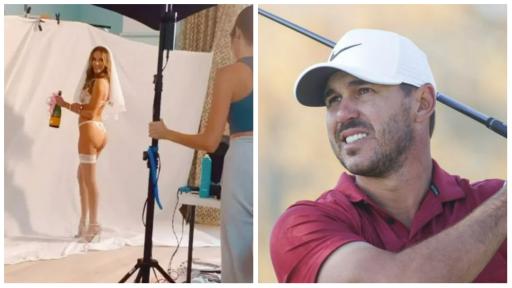 LIV Golf star Brooks Koepka was given a cheeky lingerie surprise by his wife Jena Sims on their wedding day in June, it has been revealed by Sims on her Instagram.

Sims, who works as an actress and model, was doing a Q&A with her followers when she shared the surprise she gave Koepka ahead of their big day.

When Brooks was away, Jena decided to round up her troops and get to work on a photo shoot wearing some lingerie.

The photos were then sewn in to Brooks' jacket on their wedding day, much to his surprise as you can see below.

Koepka and Sims got married in June in a lavish wedding at the Turks and Caicos.

Sims captioned her post: "I had a whole night (brooks wasn’t home!) and did a shoot with @slimshayedy @jessicalindsayglam @sarahannahsims for the images printed on the inside of brooks’ jacket."

The pair had been engaged for 14 months after Koepka finally popped the question.

Sims looked to be having the time of her life on their wedding day.

Images and short videos capture her dancing and grinning from ear-to-ear.

The couple even jumped into a pool arm in arm.

More: 9 players who changed their minds over joining LIV Golf

Earlier this season, Koepka expressed his desire to remain with the PGA Tour.

But then he completely he changed his mind and joined the Saudi-backed LIV Golf Tour.

"Opinions change, man," Koepka told reporters in a tense press conference in Portland about his decision to join the Saudi-backed series.

Koepka is now suspended from the PGA Tour as a result of committing himself to the LIV Golf Tour.

This explains why he was not able to compete in Davis Love's United States Presidents Cup side this week.

Koepka has been struggling to find form of late with his best result in four LIV Golf tournaments a tie for 11th in Bedminster.

Next Page: World No.1 Scottie Scheffler hits a COLD SHANK at the Presidents Cup!