Bryson DeChambeau was interviewed by Tucker Carlson on Fox News ahead of the third LIV Golf event at Donald Trump's course in Bedminster. 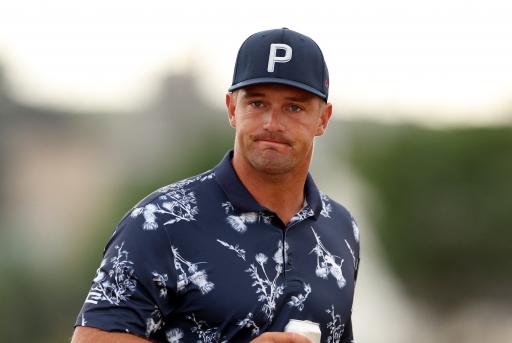 Bryson DeChambeau claimed he "personally knows" golf's civil war will sort itself out soon as he claimed his LIV decision has paid off in an interview with Tucker Carlson on Fox News.

The interview was recorded before the third LIV Golf event at Donald Trump's Bedminster course over the weekend.

He suggested that it's likely that it will be resolved either in the court room or if the two sides sit round the negotiating table to hash things out.

DeChambeau, who finished T31 in his second LIV Golf event and picked up a check for $151,000, then broke out in to a pizza analogy over what's been going on.

"It doesn't make any sense," he said.

This is DeChambeau's analogy:

"It's so weird, because it's like -- let's use this as a reference. I heard this earlier this week. You have a pizza shop that's been in existence for 50 years. And all the customers go to it and it's a great product. All of a sudden, a new pizza shop opens up, right?And they start paying the customers to come eat at their place, and that pizza is potentially a little bit better of a pizza, right? And then, all of a sudden, that original pizza house goes, if you go over there, we're banning you from ever coming back to our pizza shop. What's wrong with that economic model?"

"I personally know it will get figured out, whether it's legally or they come to the table and work out terms."

Interesting thoughts, to say the least.

I'll throw this one back over to DeChambeau, because there could be a hitch in his genius economic model.

How do you make fans watch them eat these new pizzas?

Who wants to watch people eat pizza that nobody has ever heard of?

Eventually this hypothetical pizza place is going to stop paying the customers if people aren't watching them eat.

Where has this notion suddenly come from that the two options for golfers are play for LIV or play for FREE?! A LOT of golfers are making a very good living on the PGA Tour.
The whole persecuted, downtrodden, underpaid workers act will wear thin very quickly. pic.twitter.com/OhQKDrVDf9

Tucker and DeChambeau talk about the pros and cons of joining #LIVGolf -- Bryson says he has no regrets. pic.twitter.com/GNRUZHYYzp

In other LIV Golf news, United States Presidents Cup captain Davis Love III has fired a warning shot to DeChambeau and the other rebels.

DeChambeau has not resigned his PGA Tour membership, suggesting that he would still like to play some events going forward.

Love claims that this "cherry picking" should not be allowed and has hinted at a major player boycott over LIV Golf.

Next page: LIV Golf Bedminster tickets were selling for...$1