The LIV Golf rebels have been pouring into Pumpkin Ridge ahead of the second event of the new series, with many big names set to face the press on Tuesday. 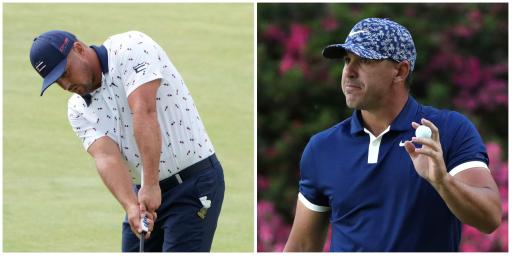 Bryson DeChambeau, Brooks Koepka and Patrick Reed have arrived in Portland to practice ahead of the second event of the LIV Golf Invitational Series.

DeChambeau and Reed were pictured practising next to each other on the driving range at Pumpkin Ridge as they prepare to make their LIV Golf debuts.

Koepka, 32, was seen on the range as was his caddie Ricky Elliott who was spotted by Mike McAllister having a chat with new recruit and World No.2 amateur Eugenio Chacarra.

Reed, who has made two top-10s in 20 events on the PGA Tour in 2022, was spotted with a LIV Golf cap on. The former Masters champion is one of the most high-profile acquisitions by the commissioner Greg Norman for the first event in America.

Much like the schedule at Centurion Golf Club earlier this month, the big names will hold press conferences in Portland on Tuesday and Wednesday.

DeChambeau will face the press at 11 am local time alongside fellow PGA Tour winners Abraham Ancer and Matthew Wolff, while it is the turn of Koepka, Reed and Pat Perez at 1 pm local time.

On Wednesday at 9 am local time, three team captains will address the media. Sergio Garcia, Martin Kaymer and Lee Westwood will all respectively lead Fireballs, Cleeks and Majestics this time around.

The team draft will take place on Tuesday evening and slight adjustments have been made to the event timings from the first tournament near London.

The first shotgun start will be at 1.15 pm local time on Thursday, which is an hour earlier than the 2.15 pm starting time at Centurion Golf Club.