Phil Mickelson arrived at Centurion Golf Club today to face the media and to play in the LIV Golf pro-am alongside Yasir Al-Rumayyan and Lee Westwood. 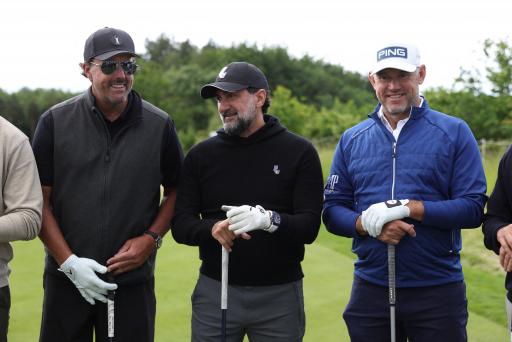 Al-Rumayyan is also the chairman of Newcastle United of the Premier league. Lee Westwood was also in their group that teed off at Centurion just after 11 am.

Mickelson, 51, spoke with Al-Rumayyan on the first tee box before hitting his opening blow. He pulled it right with an iron towards the fairway bunker.

Although Callaway decided to pause their relationship with the six-time major champion several months ago, Mickelson still appeared to be using a Callaway Rogue driver during the pro-am today.

We walked a few holes with Mickelson at Centurion this afternoon and we noted he had Callaway Apex MB irons in the bag, as well as his trusty Odyssey putter.

Callaway today confirmed to us that their partnership with Mickelson is still paused.

Mickelson faced the media this morning in St. Albans ahead of the first event of the LIV Golf Invitational Series alongside Justin Harding, Chase Koepka and Ratchanon Chantananuwat.

Related: Ian Poulter on LIV Golf Series: "There is much more to it than money"

Greg Norman, the commissioner of the breakaway movement and the CEO of LIV Golf Investments, was in attendance on the driving range this morning ahead of the pro-am.

Mickelson strategically fielded questions about the PGA Tour and the human rights record of Saudi Arabia, but he confirmed he will play in the US Open next week.

As a 45-time winner on the tour which he joined in 1992, the American believes he doesn't need to give up his lifetime membership on the circuit.