Henrik Stenson offered an interesting answer when asked to clarify his "for now" comment after being stripped of the Ryder Cup Europe captaincy. 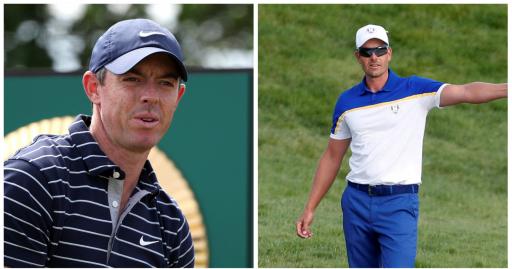 Henrik Stenson didn't appear to rule out legal action after being stripped of the Ryder Cup captaincy in his first press conference as a LIV Golf player.

The Swede, 46, only spent 127 days in the role as the Ryder Cup Europe skipper off the back of reportedly making "multiple assurances" he wouldn't defect to the Saudi-backed series.

Sources from multiple news outlets claimed that Stenson's decision to distance himself from LIV came after Phil Mickelson's controversial remarks were published in February.

Stenson, the 2016 Open Winner, reportedly was unsure if the LIV Golf series would get off the ground but he was persuaded to join after seeing the success of the first two events.

He will be a LIV Golf debutant at Trump National in Bedminster, New Jersey, this weekend alongside Paul Casey, Jason Kokrak and Charles Howell III.

"I don't feel like I've given it up. I made every arrangement possible here to be able to fulfil my captain's duties, and I've had great help here from LIV to be able to do that. And still, the decision was made that I was to be removed," Stenson told the media.

"I'm obviously disappointed over the situation. But it is what it is, and yeah, we move on from there now."

When Stenson was announced as the captain, he confirmed that he had been in talks with LIV. He played at the Saudi International at the beginning of the year, which was won by Harold Varner III.

The Swede confirmed that he had to "give his word" that he wouldn't join LIV.

After four months, he has changed his mind.

Asked if he knew he would lose the captaincy, Stenson said: "We had—we had discussions and I informed them of the decision to go and play in LIV tournaments. [Team Europe] had a, had a short period of time where they were kind of discussing or debating what was going to happen, and I was informed of their decision shortly after."

One of the more intriguing aspects of Stenson's press conference included the fact he did not rule out a legal response to being "removed" from the captaincy.

In his original statement, which you can read here, Stenson said he had accepted the decision "for now".

When asked to explain this, Stenson told the media: "I just expect to be treated fairly going forward depending on what the outcomes are in this whole case, and that is yet to be—yet to be seen what decisions are to be made and when we will be notified of anything like the boys are saying here, qualification and vice captaincies and all the rest.

"So up until that point, we just wait for the European Tour and Ryder Cup Europe to make those announcements."

At the time of writing, five of the 12 players from the 2021 European Ryder Cup team have joined LIV Golf.

The PGA of America, DP World Tour and Ryder Cup have so far been absolutely adamant that LIV players should be prevented from playing.

Stenson said of the situation: "I obviously feel like it's a shame that we ended up in this situation, and I just hope that we can get a resolution as soon as possible here for all tours and everyone involved, and we can all kind of co-exist together."

He added: "Yeah, all the players love the Ryder Cup and Presidents Cup. Yeah, it's just a shame we ended up in this situation. I hope for a quick solution."

Next page: Dustin Johnson reacts after Trump is late to pro-am tee time