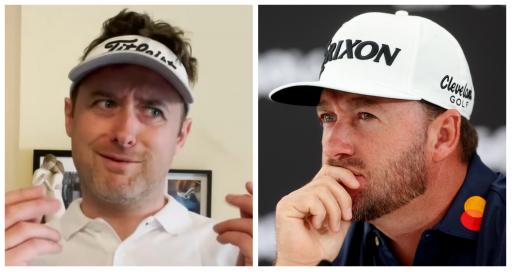 Also known as Conor Sketches, the comedian has taken aim at the players who have decided to participate in the controversial series.

Lee Westwood also joins in from his private jet.

Talk of money has dominated the sport in recent weeks and months.

In the sketch, Koepka is welcomed to the LIV Golf family to the tune of "For The Love of Money" by the O'Jays.

It has not been reported what Koepka's signing on fee with LIV Golf is.

His signing has not officially been confirmed yet.

But four-time major winner Koepka has stripped his social media bio of any mention of the PGA Tour and he's also withdrawn from the forthcoming Travelers Championship.

The next LIV Golf Invitational Series event is due to take place next weekend at Pumpkin Ridge in Portland over from 30 July to 2 July.

In a direct response to LIV Golf, the PGA Tour have announced sweeping changes to their schedule and plan on introducing no-cut events with prize purses to rival Greg Norman's LIV Golf.

From next season, there will be events on the PGA Tour where prize purses reach $20million

Only players who are in the top 50 in the FedEx Cup points race are eligible to compete.

The PGA Tour will also reportedly change their schedule to co-incide with the calender year and remove the wraparound season.