Here is everything you need to know about the second event of the LIV Golf Invitational Series in Portland. 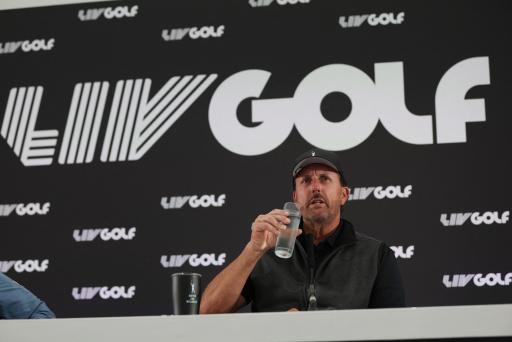 After months of speculation LIV Golf is here and will now head to Portland for the second tournament of the eight-event $255million global series.

Here is all you need to know ahead of the second event of the Greg Norman-led league which as been the chatter of the golf world for months and months.

Dustin Johnson, Phil Mickelson, Sergio Garcia, Lee Westwood and Ian Poiulter will be back for the LIV Golf Portland event, but they will be joined by a few more star names this time around following the signings of Brooks Koepka, Bryson DeChambeau, Patrick Reed and Abraham Ancer.

Who are the 12 captains at LIV Golf Portland?

Who is playing at LIV Golf Portland?

LIV Golf have confirmed 45 of the 48 players for the second LIV Golf event in Portland from June 30 to July 2.

They have also notified each player's OWGR in their latest post, which is a little interesting given LIV Golf events - as of right now - do not feature ranking points.

Related: Everything you need to know about LIV Golf Portland

But at least it gives us all an idea of the improved star power in Portland compared to London, especially with the inclusion of major champions Koepka, DeChambeau, Abraham Ancer and Patrick Reed.

Three more players are yet to be confirmed for Portland, so perhaps we will see some more PGA Tour stars make the move.

Rickie Fowler has been strongly linked with a move to LIV Golf, as too the likes of Viktor Hovland, Bubba Watson, Matt Wolff, Jason Kokrak and Adam Scott.

Who is in the LIV Golf Portland field?

Which players are OUT from LIV Golf London and IN for LIV Golf Portland?

Where is the event in Portland going to be played?

When is it going to be played?

What does this mean for the majors, Ryder Cup and other tours?

Some players have resigned their membership from the PGA Tour, meaning that they are ineligible for selection to the Ryder Cup.

One of those players who has resigned is Dustin Johnson and therefore is not currently able to be selected for the 2023 Ryder Cup in Rome.

Phil Mickelson ended speculation about his future by confirming he was going to play in all LIV Golf events this year and next year.

He has not resigned his membership to the PGA Tour, insisting that he has earned his life membership and it should be his choice.

There are eight events this year and 10 scheduled for 2023. The schedule would likely then be expanded.

Greg Norman, LIV Golf Investments CEO, confirmed that a further $2billion will be invested into LIV Golf over the next two years by PIF.

He has promised that LIV Golf will support players in court against the PGA Tour against bans, fines and suspensions.

Each of the four majors are independently run and can decide whether LIV Golf players can participate in their competitions.

What has the DP World Tour said?

They previously formed an “strategic alliance” with the PGA Tour in the wake of talk about rival golf leagues.

That strategic alliance will be tested at the Genesis Scottish Open.

That is because for the first time in its history it is co-sanctioned by the PGA Tour.

The Public Investment Fund is one of the world’s largest wealth funds.

It is the sovereign wealth of Saudi Arabia.

Why is it so controversial?

Critics argue that Saudi Arabia are attempting to clean up their image by investing in sport.

That practice is called “sportswashing”.

They claim it is also part of an effort by Saudi Arabia to eventually increase their GDP by looking for other business opportunities away from their dependency on oil.

What is the format of LIV Golf?

All 48 players invited compete against each other in traditional stroke play format.

But the tournament is played over 54 holes.

There is not cut and guaranteed pay outs for each competitor, which is a departure from the established main tours.

There is a shot gun start which means every player starts at the same time on a different hole.

A draft will help allocate the players into their team format.

They are picked by the designated team captains.

For the first two rounds, the best two stroke play scores will count for each team.

For the third round, the best three scores will count, with the lowest overall team score after 54 holes determined the winner.

How did the idea come about?

Reports began to surface as far back as 2019 about a rival golf league back by Saudi Arabia.

It was only in late 2021 that the proposal truly began to take shape after LIV Golf Investments came into existence.

This new entity backed by Saudi Arabia’s PIF ploughed $200million into the Asian Tour and later upped that to $300million.

Yes, they are different for each event.

These were the teams for the first event at Centurion Club:

Who won the first event?

Stinger, made up of Schwartzel, Hennie du Plessis, Louis Oosthuizen and Branden Grace.

What is the prize purse for the Portland event?

The total prize purse is $25million.

The winner will take home $4million.

How much will each team earn?

Are there ranking points?

At present, there are no world ranking points offered.

Greg Norman has confirmed LIV Golf has applied to the OWGR so world ranking points can be offered.

This would allow LIV Golf players to earn sports in majors.

How much will the players earn?

The first seven events all have a prize purse of $25million, with $20million being distributed between the 48-man field and the remaining $5million shared between the top three teams.

An individual champion will be crowned at the end of those events, with $30million fund distributed to the top three players providing they have played a minimum of four tournaments.

The prize purse for the season finale in Miami will see $50million allocated between each of the 12 four-man teams.

Each player also earns a 25 per cent cut of the team earnings, with $16million awarded to the winning team and $1million for the team finishing 12th.

What is the schedule of LIV Golf?

What does LIV mean?

It is the Roman numeral for 54.

It has has two meanings: 54 is the lowest score you could shoot if you were to birdie every hole on a par-72 course.

It is also the number of holes to be played in each event.