Patrick Cantlay spoke to the media about LIV Golf ahead of the Travelers Championship on the PGA Tour. 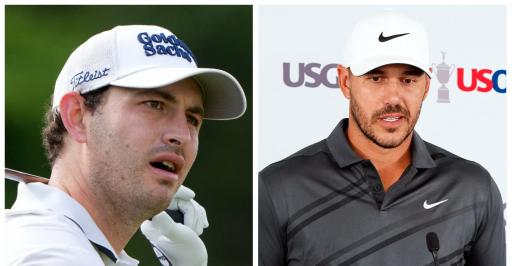 Patrick Cantlay admitted “everyone is concerned” about the future of the PGA Tour ahead of the Travelers Championship.

At the time of writing, it has not been confirmed but it is widely expected that Brooks Koepka will be leaving the PGA Tour in favour of the riches of the Saudi-backed LIV Golf series.

Koepka, 32, was in the field at TPC River Highlands this week but withdrew from the tournament yesterday, sparking rumours that an announcement to the rival league is imminent.

If Koepka were to join LIV Golf, it would represent one of the bigger shocks considering the four-time major champion previously claimed he wasn’t going anywhere.

Koepka appeared to be irritated with questions about LIV Golf ahead of the US Open. He accused the media of casting “a black cloud” over the tournament. “I think that sucks,” he said.

Asked about his reaction to the news, Cantlay said: “I haven't talked to any of those guys about it, but, you know, if it makes sense for them and they feel like it's the best opportunity for them professionally, then I understand that.

“Everyone has to make their own personal best decision.

How concerned is Cantlay?

“A lot of us are hyper competitive out here and that's maybe what drove us to be as good as we are.

“So, any time there's a potential fracture in the sport I don't think that's good for the sport.

“You don't see it in any of the other major sports. In general, all the talent is on one tour or league.

“So, yeah, I think it's definitely a real concern.”

More: What you need to know about next LIV Golf event

According to various reports, Monahan made clear that there was “no way back” to the PGA Tour to the players who have defected.

But according to Golf Channel, quoting insiders, Monahan did not want to fully reveal his hand as potential LIV Golf defectors sat in the audience.

It has also been revealed that the PGA Tour, starting from the 2023 season, will shake things up.

Wholesale changes will be made that include the introduction of eight limited-field no-cut events where the purses will be at least $20million or more.

The current prize purses in LIV Golf are $25million.

These new PGA Tour events will only be available for the top 50 finishers in the prior season’s FedEx Cup standings.

Some of these new events will be in the heart of the season and others in the fall.

These sweeping changes would also see the tour returning to a season based on the calendar year.

The PGA Tour season was changed to include the current wraparound campaign in 2013-14.

Cantlay was asked whether he thought it was true the players who have already left the PGA Tour “can’t compete against the best anymore”.

He said: “That notion hadn't entered my head. I said it, I think I had a press conference maybe a month or so ago, and I think the reasons for different guys going or not going could vary widely.

“So, to kind of blanket them all into the same decision-making process I think would be a mistake.

“I think it's a different decision for everybody to stay or to go and their reasons may vary greatly. I don't necessarily think that all the guys going over there are saying that they're not, you know, they have conceded trying to be the best player in the world or the best they possibly can be.

“They may have gone for other reasons.”