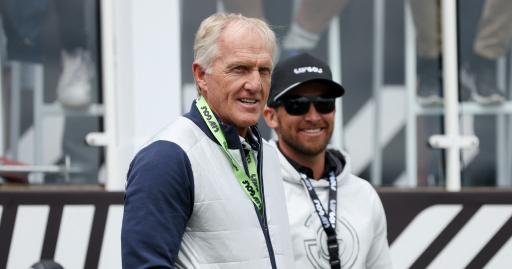 LIV Golf commissioner Greg Norman added fire to the hostilities with the PGA Tour by posting statistics which suggest the Portland Invitational is the strongest event this week.

Norman, 67, posted an image on Twitter which shows that the first LIV Golf event in America has a higher percentage of the last 50 major winners and more players from the top 100 in the world rankings.

Bryson DeChambeau, Brooks Koepka and Patrick Reed are three major champions that have bolstered the LIV Golf roster at Pumpkin Ridge, with Dustin Johnson being the highest-ranked player in the OWGR who has made the controversial switch.

The most significant observation that the two-time major champion made was with the John Deere Classic on the PGA Tour, a field which includes none of the last 24 major winners.

Norman has increased the confrontational nature of his relationship with the PGA Tour and commissioner Jay Monahan who has suspended all of the players who've left the American circuit.

It is worth noting that despite the LIV Golf event in Portland having a stronger field, they have only pulled in two players in the world's top 20 with many of the world's best golfers completely dismissing the prospect of moving over.

The John Deere Classic at TPC Deere Run represents the last chance for many players to qualify for The 150th Open Championship in a couple of weeks' time.

Norman has been particularly active on social media this week. On Thursday, he encouraged the idea of a match between PGA Tour players and LIV Golf rebels.

Along with the DP World Tour today reacting to the prospect of players taking fines and suspensions to court, the stake that's been driven into the heart of golf is becoming even stronger.