9/11 families tell LIV Golf players in Portland: "We are not going away"

The 9/11 families told the LIV Golf players they were "not going away" before being taken off the property by security. 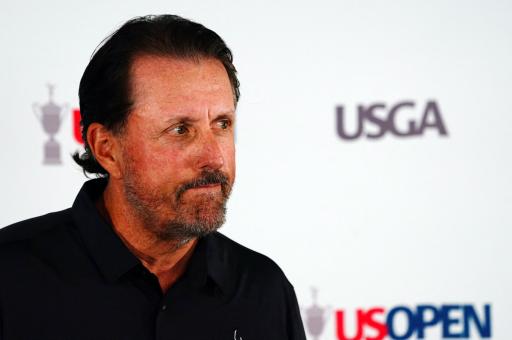 “Every tournament you’re going to have to deal with us.” This was the message by the 9/11 families seeking justice to the LIV Golf players ahead of the first mega money event on US soil backed by Saudi Arabia.

The second LIV Golf Invitational series event, which has a total prize purse of $25million, is being held at Pumpkin Ridge Golf Club in Portland, Oregon, over the next two days.

But on the morning of the tournament’s first day’s play, the family members of those killed in the 2001 terrorist attacks on 11 September held a press conference.

They said players like Phil Mickelson, Brooks Koepka, Bryson DeChambeau and Patrick Reed are complicit in the Kingdom’s efforts to clean up its atrocious human rights record.

Pat Perez also said he had "no concerns" over the source of the money he is receiving from LIV Golf.

“Through this golf tournament, Saudi Arabia is attempting to sportswash, avoid accountability for its egregious human rights violations, and continue decades of denying responsibility for its direct role in the murder of my father and thousands of others,” said Brett Eagleson, whose father, Bruce Eagleson, died on 9/11 at the World Trade Center.

“It is a slap in the face that, despite knowing all of that, some professional golfers rationalize their participation in LIV, turning a blind eye to ongoing Saudi atrocities and the Saudi’s attack on America while accepting the blood money offered to them.”

9/11 families say they tried to approach golfers outside their hotel today to discuss their choice, but were unsuccessful as security removed them.

“Every tournament you’re gonna have to deal with us, more people, our stories. We’re not going away.” pic.twitter.com/NKN0NryLXA

Tim Frolich, an injured survivor, added: “It is abhorrent for this and other LIV tournaments to proceed on American soil while thousands who have been harmed or have lost loved ones have seen Saudi Arabia suffer no consequences for their unspeakable actions.

“What we are witnessing is money used to forgive the murder of thousands of innocent people, and it is nothing short of disgusting.”

For over 20 years, thousands of victims of the 9/11 terrorist attacks have sought accountability from and justice against the Kingdom of Saudi Arabia for its now well-documented role in the attacks, according to 9/11 Justice.

Among the thousands of pages of documents, videos, and other materials recently released is a 2017 FBI Report from the Bureau’s Washington Field Office that reveals that Omar al Bayoumi, a Saudi agent who assisted two of the hijackers upon their arrival in the U.S., was working for Saudi Intelligence and reporting directly to Saudi Ambassador Prince Bandar in Washington leading up to the attacks.

Earlier this month, nearly 2,500 9/11 community members signed onto an open letter thanking the PGA Tour golfers who have rejected lucrative offers from LIV Golf to play in their tournaments.

Security from LIV Golf reportedly escorted the protesters off the property.

In a response, a LIV Golf spokesperson told bunkered.co.uk: “We have tremendous respect and sympathy for the families of anyone whose loved one was killed on September 11, 2001.

“Al Qaeda’s attack on the United States was a national tragedy.

“We continue to believe that sports, including golf, are an important way to bring change to the world. Sports is a productive outlet for millions of young people everywhere and we are proud that golf is increasingly popular throughout the world, including the Middle East.

“Golf is a force for good that entertains and teaches the values of fair play, competition, and excellence through hard work.

“We understand and respect that not everyone will agree with us, but we believe deeply that golf is a force for good and we look forward to continuing our efforts to grow the game, in the U.S. and around the world.”

A protestor allegedly said: “Every tournament you’re going to have to deal with us, more people, our stories. We’re not going away.”