DP World Tour CEO Keith Pelley has issued a stern response to the 16 players who have threatened legal action over their fines and suspensions. 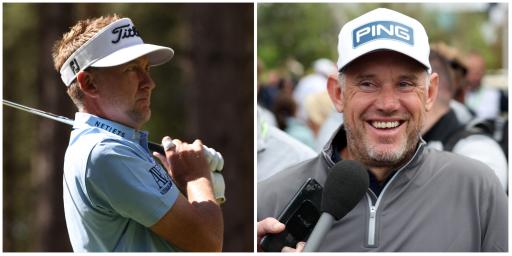 Pelley said the letter he received from this group, including Lee Westwood and Ian Poulter, contained so many "inaccuracies" that "it cannot remain unchallenged."

In a report by The Telegraph’s Jamie Corrigan, legal action will be taken against the old European Tour unless they rescind their sanctions by July 1, which is today.

The DP World Tour has fined each of the LIV Golf rebels from the DP World Tour £100,000 and they have been banned from playing in three co-sanctioned events with the PGA Tour.

Pelley wrote at the bottom of the statement that it would be inappropriate to comment on potential legal matters which could arise.

"Before joining LIV Golf, players knew there would be consequences if they chose money over competition. Many of them at the time understood and accepted that. Indeed, as one player named in the letter said in a media interview earlier this year; ‘If they ban me, they ban me.’ It is not credible that some are now surprised with the actions we have taken," today's statement from Pelley reads.

Related: PGA Tour: Did Morgan Hoffman get penalised for this bunker shot?

"The letter claims that these players ‘care deeply’ for the DP World Tour. An analysis of the past participation statistics on our Tour in recent years of several of the leading players named, suggests otherwise.

"One player in particular named in the note has only played six Rolex Series events in the past five years. Another one, only four. I wish many of them had been as keen to play on our Tour then as they seem to be now, based on the fact they have either resigned their membership of the PGA Tour or, if they are still in membership, have been suspended indefinitely.

"Furthermore, given how deeply these players say they care about the DP World Tour, perhaps some of them could have played in Ireland this week in support of our new title sponsor, in particular one player who gave us a signed commitment to play at Mount Juliet.

"With that player currently in action at Pumpkin Ridge, you can imagine the allegation in the letter that we are in the wrong, is hard to accept."

Earlier this week, the DP World Tour and the PGA Tour announced an extension of their strategic alliance until 2035. This increased the PGA Tour's stake in European Tour Productions from 15 per cent to 40 per cent.

The new joint venture will provide additional competitive opportunities for professional golfers of both tours and also establish a clearly defined pathway for top players around the world.

The DP World Tour has certainly come out swinging after weeks of deafening silence. They have shown a similarly aggressive stance to the PGA Tour which has suspended its members who have joined the LIV Golf Series and removed them from the FedEx Cup standings.

"We also take great exception to an allegation made near the end of the letter which states we are somehow playing ‘second fiddle’ to the PGA Tour. Nothing could be further from the truth," the statement continues.

"We held a player meeting in Ireland on Tuesday where we outlined in great detail all the many benefits of our expanded relationship with the PGA Tour.

"One of those is an unprecedented ten cards on offer to the PGA Tour, cards that many of the players named in this letter desperately wanted to attain in the early stages of their careers. Why now be critical of those trying to do the same?

"The letter also expresses supposed concern about the future of the DP World Tour. Rest assured no one should have any worries on that score."