PGA Tour countersues LIV Golf: "Freeriding off the Tour and its platform" 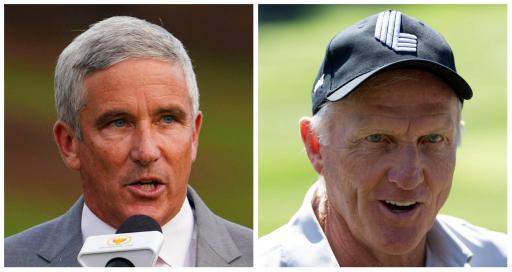 The PGA Tour's battle with the LIV Golf Invitational Series has taken another dramatic twist, as the established American circuit has filed court documents countersuing their mega-rich rival over "contract interferences".

A 72-page lawsuit was filed on Wednesday night. It is the first time that the established American circuit has legally punched back. This news was first reported by The Athletic.

The lawsuit rejects claims of antitrust violations that were filed against them in August, where 11 players were originally named as plaintiffs as all hell broke loose in the world of professional golf.

LIV Golf subsequently added themselves as a plaintiff but several players have withdrawn their names from the suit.

Related: When will the court battle happen?

At the time of writing, only three players remain in the original lawsuit. Bryson DeChambeau - who has recently addressed his LIV Golf Tour critics after facing his nemesis - remains involved in the legal action alongside American Peter Uihlien and Aussie golfer Matt Jones.

"A key component of LIV's strategy has been to intentionally induce Tour members to breach their Tour agreements and play in LIV events while seeking to maintain their Tour memberships and play in marquee Tour events like The Players and the FedEx Cup Playoffs, so LIV can free ride off the Tour and its platform.

"LIV has openly sought to damage the Tour’s business relationships with its members by inducing them to breach their contractual requirements, even going so far as to pay members' legal fees to make breaching their contracts with Tour more enticing."

Moreover, the PGA Tour claims that LIV Golf are guilty of restrictive and anticompetitive behaviour because of their regulations on league request, contract requirements and social media restrictions.

The complaint adds: "LIV has signed golfers to multi-year contracts containing obligations that are far more restrictive than anything in the regulations, including a prohibition on participation in conflicting events that, unlike the Tour's conflicting event rules, does not allow for any request for release."

This news comes as Rory McIlroy appeared to welcome the idea of peace talks with LIV Golf.

McIlroy, 33, spoke to the media before the Dunhill Links Championship on the DP World Tour.

He suggested that he too, at times, was guilty of inflammatory remarks but added: "If we can send rockets to the moon and bring them back again and have them land on their own I'm sure we can figure out how to make professional golf cohesive again."

PGA Tour commissioner, Jay Monahan, has never appeared to want to back down.

On 22 September he re-iterated that co-operating with LIV Golf was off the table.

"When you look at where we are, and you think about words and actions, we're currently in a lawsuit, so coming together and having conversations, to me, that card is off the table, and it has been for a long period of time," he told the media before the 2022 Presidents Cup at Quail Hollow Club.