Greg Norman: "Who is suppressing women's golf, quite honestly?!"

Greg Norman has revealed an offer by LIV Golf Investments to align with the LET and LPGA Tour was turned down. 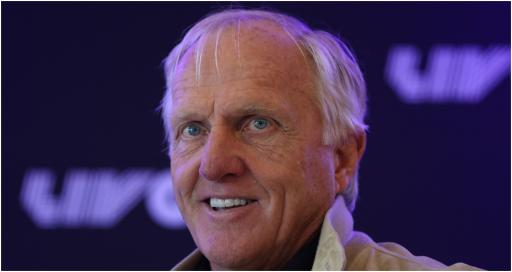 Greg Norman has revealed that an offer by LIV Golf Investments to align with the LET and LPGA Tour was rejected.

The Great White Shark, 72, recently spoke to the 5 Live Sport: All About podcast about the offer, similar to the one that was tabled and accepted by the Asian Tour.

It is the same, contentious source of money that is bankrolling the $255million LIV Golf Invitational Series.

That is due to begin in a few weeks' time at Centurion Club with some pros saying they are playing in it anyway even if they get banned.

Norman told the podcast of the offer: "Well, we did approach the LET and the LPGA with a substantial investment [offer].

He added: "We were rejected. So who is suppressing women's golf, quite honestly?"

Norman continued: "We offered that up. We may have a different strategy going forward, so sit back and wait. We're here for a long, long period of time. We're here to grow the game of golf on a global basis, not just in one specific sector [men's], it's across the board.

"Yes, people can speculate and judge and make comments but when you do know, and you do understand it, there's not been one person in the world that I've spoken to that has said, 'you're crazy, don't do this'."

Update: The LPGA Tour told Golf Channel on 21 May they "had not received" an offer from LIV Golf.

LIV Golf Investments has pledged to give the Asian Tour $300million over the next 10 years as part of an annual, international 10-event series.

Norman has consistently found himself courting controversy over his comments about his working relationship with the Saudis in recent months.

He constantly faces questions about the kingdom's attempts to "sportswash" his reputation.

Norman claimed that "everybody makes mistakes" when asked about the murder of the journalist Jamal Khashoggi.

When pressed about Saudi Arabia executing 81 people on a single day in March, he said he just looks forward and doesn't focus on politics.

His apparent gaffes have led to speculation that he could be removed as LIV Golf's chief executive.

It has also been revealed that Jack Nicklaus was approached with an $100million offer before Norman.

Nicklaus helped build the PGA Tour and refused the dizzying sum of money.

Next page: Ian Poulter discusses "pluses" of the Saudi-backed league