Padraig Harrington disappointed in Henrik Stenson: "Why not wait 15 months?"

Padraig Harrington saddened that Henrik Stenson could not have just "done the job" and then moved on to LIV Golf after the 2023 Ryder Cup. 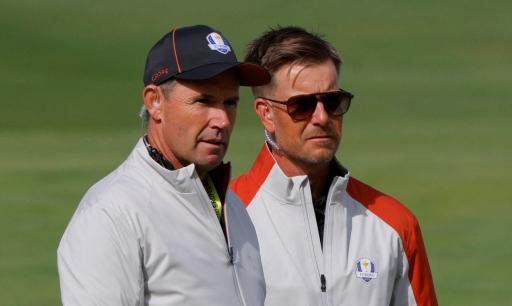 Stenson was sacked as the new captain of the 2023 European Ryder Cup team this afternoon after accepting a deal in the region of $40 million to join the Saudi-funded LIV Golf Invitational Series led by two-time Open champion Greg Norman.

Harrington, who is one of five people on the Ryder Cup selection committee, does not see why the Swede could not have wait another 15 months.

There was even a hint of Roy Keane about the Irishman's comments of "do your job" and then move on.

"When Henrik signed up to be Ryder Cup captain, he was one of the main people that would have been touted as going to LIV and he clearly chose the Ryder Cup over LIV because of the risk that LIV wouldn't happen," Harrington told Sky Sports News ahead of the Senior Open at Gleneagles.

"Now that there is no risk with LIV at this stage, or a minimal risk, LIV is here to stay and it's going to be normal in a few years time, he's jumped ship.

"So yeah, he could have waited another 15 months, let's be honest, simple. I've no problem him going to take the money, whatever you want to do, but he signed a deal, just wait 15 months, do your job and then move on then."

"He could have waited 15 months"

Harrington admits he knew Stenson was off to LIV Golf and going to be axed as captain prior to the 150th Open Championship and so the selection process for the new 2023 European Ryder Cup captain is already well under way.

"We knew it was coming, we had been planning the last 10 days but we knew it would be after The Open," said Harrington.

"Henrik has given us plenty of time, and we are already meeting to elect the next captain. It's not going to interfere with the Ryder Cup.

"I wish Henrik had waited 15 months but everyone has to make the right decision financially for themselves.

"The same deal would have been on the table for him in 15 months.

"But it's loads of time for us to get someone in place and to get a feel for what they are doing."

Harrington added: "We're only scheduling at this stage. There is no particular rush but I think it will be done pretty quickly so we can give the new captain a chance. It's a great honour in any player's life to be captain and put your own spin on it all."

Luke Donald, Paul Lawrie, Robert Karlsson and Thomas Bjorn are the four names expected to be in the running for the captaincy.

Harrington, fresh off his maiden senior major victory at the US Senior Open, is the tournament favourite at this week's Senior Open at Gleneagles in a field which also consists of Steven Alker, Ernie Els and Bernhard Langer.

Next Page: Angry LIV Golfer tells Sky Sports reporter to "go f*** yourself" at The Open