Bernhard Langer on LIV Golf: "How can this be good for the game?"

Bernhard Langer spoke to the media ahead of the Senior Open about the latest LIV Golf developments. 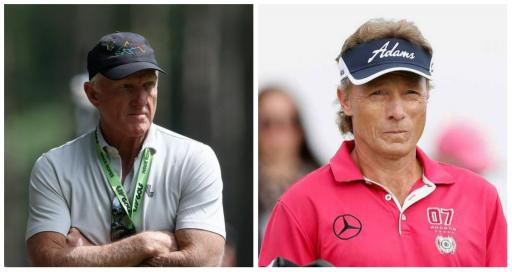 Bernhard Langer says it is "debatable" whether the controversial LIV Golf Invitational series will be good for the game.

Speaking ahead of The Senior Open at PGA Centenary at Gleneagles, the 64-year-old German conceded how some people could find this exciting.

Ryder Cup Europe are now in search of a new captain after stripping latest LIV Golf signee Henrik Stenson of the captaincy.

It was a decision in which the 46-year-old Swede said he disagreed with in a lengthy statement.

However, the ageless pro wouldn't be drawn into the topic too much, arguing: "The bottom line is we are professionals. We do this for a living".

Langer added: "I'm not part of the board discussions on this side of the Atlantic or the other, so I really wasn't involved.

"I'm just reading what you guys write and what I hear from the media or colleagues.

"It is in a way concerning, in another way, some people might thing it is exciting, I don't know if that is the right word.

"I think some of my colleagues will make a lot more money in the future. That is the outcome. That is debatable whether that is great for the game

More: Brooks Koepka got Rick Shiels ejected from VIP area at The Open

He continued: "We can compare it with other sports where they have had I don't know something similar happen in certain sports, but not in many. I think we had a wonderful product, a lot of history.

"I don't think many of us would be complaining with the living we have made from this game so far. I mean if you go back 40 or 50 years ago when Jack Nicklaus and Arnold Palmer were playing, they certainly didn't make that much money considering how good they were in the game, right?

"[The] bottom line is we are professionals, we do this for a living.

"If someone gets injured or hurt or has the yips, nobody takes care of them right. That is the other side of the argument, we are not employed by anyone we are what do you call us ... independent contractors, there you go.

"And if we don't perform, we are gone and we are history, and nobody cares about us.

"You might here the argument from some of the players that they need to take their family and myself, I've got to make the money while I can, while I'm hot, while I'm good, while I am healthy and that may only last three years.

"But again, I don't know all the facts so I shouldn't really be saying anything, that is the bottom line.

"I am just spectating, watching on and seeing where it goes. I was very happy with what we had before."