Henrik Stenson has not only been sacked as European Ryder Cup captain, but his cap sponsor has binned him, too. 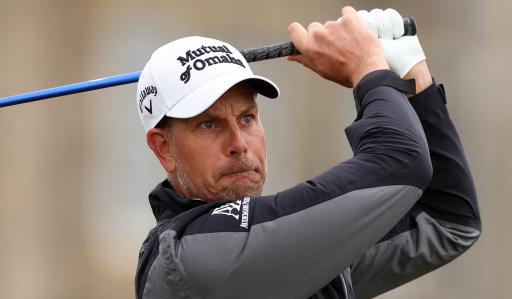 Henrik Stenson has been dropped by one of his long-time sponsors, Mutual of Omaha, following his decision to join the Saudi-funded LIV Golf Invitational Series.

Stenson was yesterday stripped of the 2023 European Ryder Cup captaincy after reportedly accepting in the region of $40 million to join Greg Norman's controversial new circuit.

The 2016 Open champion wrote a lengthy statement after being sacked as captain, and it's fair to say he was not best pleased about it.

A move to a Saudi golf league was something Stenson said just three months ago that he had no interest in as he wanted to fully set his sights on helping Europe regain the Ryder Cup next September.

But fast forward to July 2022, and Stenson has gone back on his word.

Stenson will make his LIV Golf debut in next week's tournament in Bedminster, New Jersey.

According to ESPN, Stenson and Mutual of Omaha have rather fittingly "mutually agreed to end their sponsorship deal, effective immediately."

Mutual of Omaha have sponsored Stenson for the best part of seven years, with their logo splashed on the Swede's cap ever since.

A Mutual of Omaha spokesperson says the company and Henrik Stenson have agreed to mutually part ways and end their sponsorship deal after Stenson joined LIV golf.

"A Mutual of Omaha spokesperson says the company and Henrik Stenson have agreed to mutually part ways and end their sponsorship deal after Stenson joined LIV golf," tweets Tom VanHaaren of ESPN.

RUMOUR: Is adidas Golf planning to buy a LIV Golf team for $1 billion?!