Phil Mickelson told the golf world that he would be taking time away from the PGA Tour. Could this period of absence lead to retirement? 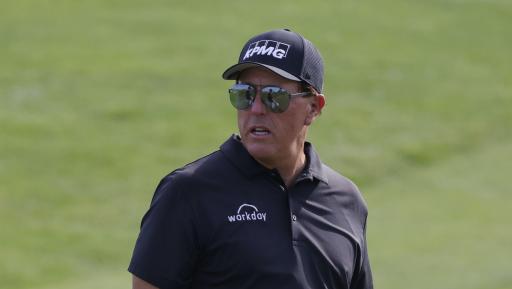 The current situation Phil Mickelson finds himself in is quite surreal. He is on the precipice of leaving his legacy behind him and falling off the edge.

KPMG have dropped him as have Workday and Heineken/Amstel. Callaway, his most recognised sponsor, have paused their relationship with the 51-year-old.

One can only assume that the world-famous brand are currently mulling over their decision to completely drop him from their playing staff.

The contrast between the despair Mickelson must currently feel to the euphoria we saw when he won the PGA Championship in 2021 is staggering.

If there was no Saudi golf league, he would still be the loveable Lefty we have all grown affection for in the last 30 years. But unfortunately, the development in the Middle East clearly ignited something in him.

It stimulated him to make unnecessary and unprovoked attacks on the PGA Tour's supposed concealing of media rights and entering into an agreement with the Saudis, despite describing them as "scary motherf***ers."

Was his behind-the-scenes work with the Saudis a genuine attempt to improve the PGA Tour with leverage? The tour has increased prize funds for the 2022 season and the FedEx Cup bonus, but would this have happened anyway?

He admitted to Alan Shipnuck that the Saudis have committed alleged atrocities and questioned their humanity, but he was still willing to describe them as "visionaries" in his recent statement.

Many golf fans didn't accept the apology that Mickelson portrayed and it's easy to sympathise with them. He didn't seem to regret his relationship with the Saudis and LIV Golf Investments headed by Greg Norman.

He denied that the comments were made on the record, which would suggest that he didn't regret saying them, he only regrets that they have been released.

His approach to the Saudi golf league was a million miles away from the attitudes shown by the likes of Jon Rahm, Justin Thomas, Rory McIlroy and Tiger Woods.

These role models have behaved like role models and it is very hard to comprehend the difference in moral interpretations between these and Mickelson.

He has stated that he needed time away from the sport. For me, this begs two questions: How long will he be away for? Is this a path towards retirement?

He is on the brink of losing all of his significant endorsement deals. He has lost a lot of fans for his eye-opening behaviour and he may have tarnished his relationship with players on the PGA Tour.

How would patrons react if they saw him at an event now? You'd like to think his six major wins and 45 PGA Tour wins would still be fresh in their memory, but are they?

He has created so many amazing moments in golf. His emotional win at The Open and his jumping celebration at The Masters in 2004 come to mind. He is an absolute legend and one of the greatest players ever.

Can all of this be forgotten because of his relationship with Saudi Arabia? I really don't know, but there is certainly a chance. This is why I think retirement must be and will be on the table.

Next Page: Shane Lowry says Honda Classic was stolen from him after late rain shower