Patrick Reed commented on the "miraculous" new prize funds on the PGA Tour and Pat Perez accused the tour of "strong-arming" players with bans and suspensions. 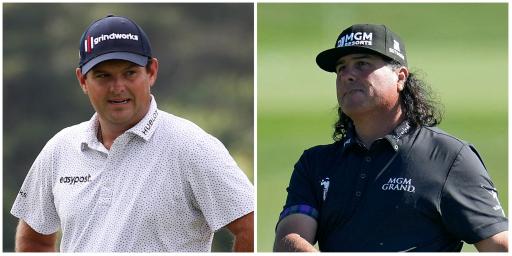 Patrick Reed and Pat Perez didn't hold back in their criticism of the PGA Tour and their reasons for joining the LIV Golf Invitational Series on Tuesday.

Addressing the media alongside Perez and Brooks Koepka, Reed sarcastically commented on the PGA Tour's new and improved prize funds for eight events in 2023.

Reed revealed he's grown tired of watching his children grow up on FaceTime and playing 30 to 35 weeks a year on the PGA Tour, an issue many players have pointed out.

The former Masters champion, who revealed he has resigned from the PGA Tour, was also critical of the FedEx Cup system and he regards the LIV Golf Series as "a true threat" to the tour.

Related: DP World Tour blocked by Patrick Reed, then calls him a "cheat"

"But when it comes to the majors, we don't really know where they all stand, obviously. And being a past champion at Augusta and having a green jacket, I would think I'd be able to play there for the rest of my life," Reed said in Portland.

"At the end of the day, that's going to be up to them, but for what I saw in London and how well this event was run and for what I've seen just in the two or three days I've been here, and then also seeing how miraculously the purses now all of a sudden went skyrocketing back up on the PGA Tour.

Related: Brooks Koepka claims LIV Golf decision was made after US Open

"It just shows that they obviously believe that this is not only a true threat, but a great tour as well if they're going and copying what we're doing.

"So for me, I believe when the time comes, we'll have world ranking here. This is going to be a tour that's going to be around forever, and at the end of the day, you play well, you're in the big events.

"If you took off any period of time because you needed it for your body, you're behind now. Everyone is going to pass you in FedEx. It was forcing you to have to play, and that's not doing anything for you mentally and physically.

"That's wearing you down, and you do that every single year and no wonder why guys are injured in their 30s and why guys are mentally tired and you just see the grind on them because they're having to grind every single week."

Perez described his chance to play in the LIV Golf Invitational Series as "winning the lottery." The 46-year-old has reportedly been paid $10 million to join the Saudi-backed series.

Much like Reed, Perez spoke of family reasons and revealed he missed the birth of his son last year to compete in the FedEx Cup Playoffs to keep his place for the next stage.

The three-time tour winner believes commissioner Jay Monahan's aggressive approach has backfired, using the field at the John Deere Classic as evidence when compared to the field in Portland this week.

"We should be able to do whatever we want. We are independent contractors. The tour has tried to strong-arm us all year and come with bans and suspensions and all that, and how'd that work? Look how many guys are here. That didn't work at all," Perez said.

"Facts are facts. Major winners and that kind of stuff, that's how I see it, but no, I'm not resigning. My hope in the end is this all can come together. I think that's what Greg Norman, LIV Group wanted in the first place. Tour didn't want to go that route. I think in the end, they may have to.