Rapper Ludacris led the post-wedding celebrations after Brooks Koepka and Jena Sims finally said "I do". 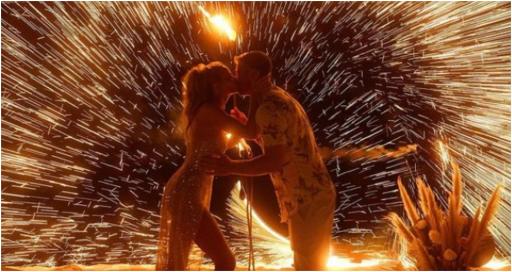 Golf power couple Brooks Koepka and Jena Sims have officially tied the knot with a glitzy ceremony in the Caribbean.

Sims has been posting images of the big week on her Instagram and it appears the rapper Ludacris led the post-wedding celebrations with a performance in Turks and Caicos.

The pair had been engaged for 14 months after Koepka finally popped the question. The 32-year-old four-time major champion met his 33-year-old wife at the Masters a few years ago and asked her out.

Sims looked to be having the time of her life. Images and short videos capture her dancing and grinning from ear-to-ear. The couple even jumped into a pool arm in arm.

Another Instagram video captures the pair cutting their wedding cake whilst another shows a photo of their wedding bed decorated with a love heart and rose petals.

Sims posted an image earlier in the week kissing Koepka with a backdrop of fireworks. She captioned the image: “You set my soul on fire, Brooks Koepka. See ya at the altar in a few.”

The pair reportedly banned phones for the ceremony so there are no pictures, contrary to the montage that Paulina Gretzky had filmed when she married Dustin Johnson.

Sims and Koepka have been together for five years. She is a model and is involved in several businesses including just recently launching her own shoe line.

Sims revealed that Koepka was heavily involved in the wedding preparations by hopping in on all of the Zoom calls. “It’s fun to be a team mate with him on this,” she said.

Koepka has had a forgetful season so far on the PGA Tour. He missed the cut at the Masters after shooting two rounds of 75. At the US PGA Championship he finished T-55.