Lee Westwood caught a bit of heat for trying to flog LIV Golf Tour tickets on Twitter ahead of the sixth $25m event in Bangkok. 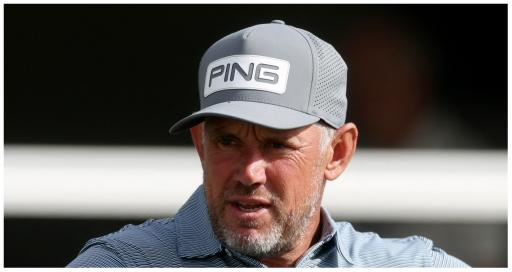 The LIV Golf Tour is heading to Bangkok this week to make its debut in Asia, featuring the likes of our subject Lee Westwood.

As ever, there is is a bit of promotional work that Westwood and the rest of the LIV boys need to do to plug their tournament.

If you weren't aware, LIV have caught a bit of flack over the fact that they have had to give away tickets for free in their inaugural season, which fellow LIV player and Crushers GC captain Bryson DeChambeau has described as "a beta test".

Westwood once again reached out to his followers and implored "anyone in and around" the area to come and support the event using his code WESTWOOD25 to get a discount.

Side note: The codes that we are talking about also previously revealed some of LIV's signings before they were made official.

What an hilarious gaffe that was!

Anyway, Westy was on the receiving end of some rather interesting comments to say the least:

If I want to watch clowns perform I’ll go to a circus not a LIV event!!

I'd rather cut my own arm off.

Oh don’t do that….I’m sure Lee’s bosses would gladly do that for you, they’ve had enough practice

That's it guys get going. Those tickets aren't going to sell themselves

Chased a paycheck, now begging people to pay to come watch! You have truly sunk to the bottom my lad!

Aren’t you and independent contractor? When you get into ticket sales @WestwoodLee?

I wouldn't go if it was free entry.

There's better things to do in Bangkok than watch you lot

Sinking lower and lower, you'll be selling LIV t shirts on a stand beside the 18th green soon.

No thanks prefer to watch the wall

Hi, I am @WestwoodLee and these are my principles: pic.twitter.com/5kqz0egNfW

LIV total gate will not exceed 15k this week. WESTYFREE would not even get them to come. Enjoy the circus

LIV Golf Bangkok will take place over October 7-9 at Stonehill Golf Club in the Phathum Thani province of Thailand.

Here is the field taking part, where there has been only one change since their last event in Chicago: