LIV Golf's Greg Norman has urged Rory McIlroy not to begrudge players leaving the PGA Tour, but who is right? GolfMagic readers have been debating... 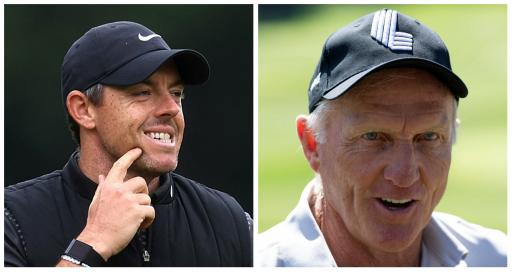 Even before the first tee shot was hit at LIV Golf's curtain-raising event at Centurion Club and the ban hammer came down from PGA Tour commissioner Jay Monahan, the two were trading barbs.

Things started coming to a head in February 2022 before the Genesis Invitational that is hosted by Tiger Woods at Riviera. One by one, a number of the game's elite faced questions about whether they were in or out.

Brooks Koepka said "someone" was going to sell out but opinions change, man! Jon Rahm appeared to be watching too many fantasy dramas on television as he pledged "his fealty" to the PGA Tour. Dustin Johnson released a statement that was DEFINITELY written by him saying he wasn't going anywhere.

Related: 9 players who changed their tune about LIV Golf

When that tournament was over, McIlroy chimed: "Who's left?!"

He later admitted his comment was ill-judged, though he recently conceded he has been guilty of saying too many inflammatory remarks about LIV.

In recent weeks, Norman, 67, has renewed his war of words with 33-year-old McIlroy in media interviews.

It's clear the Great White Shark still thinks McIlroy is a hypocrite. In a recent interview with Piers Morgan on TalkTV before LIV Golf Bangkok, he urged McIlroy not to begrudge the players who wanted to make the jump across.

We threw up this graphic on our Instagram, and it prompted a lively debate:

Here is some reaction from our readers:

"He's not wrong, they all chase money, even Rory!"

"If LIV Golf would actually play 72 hole events and have cuts, then things could have been a lot different for the PGA Tour. Until then, they are just overpaid, entitled cry babies.

"The Shark is right, Rory couldn't even play the Irish Open this year but played JP McManus Pro-Am."

"He went to play on the PGA Tour and is closing in on winning the FedEx Cup and Order of Merit on the European Tour in the same year so sorry, Greg, he is still playing both Tours."

"Not the overall reason he went to the PGA Tour. Just trying to create a story, Greg!"

"He went to compete, there's a big difference..."

"It wasn't dirty money on the PGA Tour"

"Who cares what Norman thinks?"

"This is all rather pathetic. LIV Golf is here. If that is the only way to drum up publicity then his product won't last long."

"The main difference is that Rory earned his way to play the European Tour and after earned his way to the PGA Tour. You can't earn your way into LIV Golf, you just need to be invited, that's why I don't support it."

What do you think? Are you Team Rory or Team Greg?

Or are you like Tommy Fleetwood, who is absolutely bored of LIV Golf chatter but thinks it's like a scratch you cannot itch?

Get involved in the debate.