Bubba Watson revealed he has had tough conversations with his children about returning to Augusta National in April having joined the LIV Golf Tour. 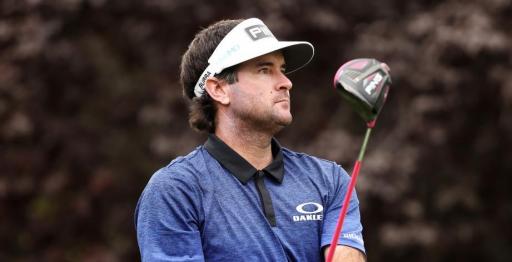 LIV Golf player Bubba Watson declared he wouldn't want to be at Augusta National anyway if he was banned from playing in The Masters.

As reported by Golf Digest, Watson has told his children that there is a possibility he may not be welcome back at Magnolia Lane due to defecting to the Saudi-backed series.

The 43-year-old won the Green Jacket in 2012 and 2014. He produced one of the iconic moments of the tournament when hitting an incredible recovery shot in 2012 on his way to beating Louis Oosthuizen in a playoff.

Former champions of The Masters can play at the event for the rest of their lives, but with the new dynamic of LIV Golf, it is still unclear as to how each major organisation will deal with the rebels who've joined Greg Norman's tour.

"For me, it’s a weird situation being a Masters champion; right now, we can play in it, and I'm hoping and praying they make the right decisions," Watson said before the LIV Golf Boston Invitational.

"I sat my kids down and told them there is a possibility we can't go to Augusta. If they (Augusta National) tell me I can’t go, (as a) past champion, then I don't want to be there anyway because that's just the wrong way to look at it."

Watson is yet to play on the LIV Golf Tour due to injury. He is a non-playing captain for the Niblicks, a team which contains Hudson Swafford, James Piot, Turk Pettit and new recruit Harold Varner III.

The PGA Tour has suspended all players who have moved to the controversial new league and commissioner Jay Monahan said in a press conference at East Lake that there is no way back for these players.

In terms of Augusta National, the USGA, The R&A and the PGA of America, they are yet to decide how to deal with those who have defected. Many LIV Golf players have exemptions that still run for a number of years at different major tournaments.

The USGA and The R&A allowed those who competed in the first LIV event at the start of June to compete in their championships as they judged it unfair to alter qualification criteria on such short notice.