This is everything you need to know about LIV Golf Boston, the fourth event of the fledgling circuit's controversial series. 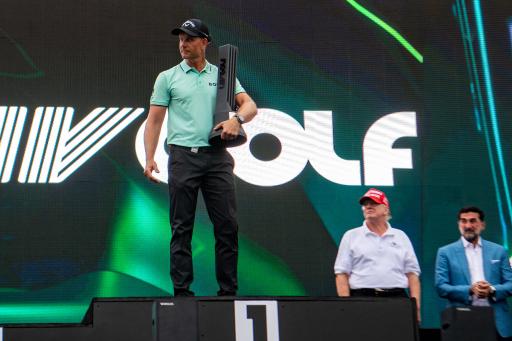 It is the first tournament after golf's civil war finally made its way to the courtroom after several LIV players were named in an antitrust lawsuit.

Originally, there were 11 players who took legal action. Three of those players, Hudson Swafford, Matt Jones and Talor Gooch also attempted to force their way into the PGA Tour's FedEx Cup Playoffs.

Related: Everything you need to know about LIV Golf

A federal judge denied their request. Subsequently, two players decided to withdraw their names from the lawsuit. Pat Perez, who previously turned heads when he worse a t-shirt made out of dollar bills at a LIV draft party, and Carlos Ortiz, have opted out of legal action.

LIV Golf Boston also comes at a time when the PGA Tour revealed their masterplan to deal with LIV.

They have announced dramatic increases to prize purses, jacked up their Player Impact Program and have pledged guaranteed cash of $500,000 for fully exempt PGA Tour members that go against their tournament winnings.

Tiger Woods and Rory McIlroy have also confirmed they will be starting a Monday night golf league, called TGL, in partnership with the PGA Tour.

Greg Norman, the LIV Golf chief executive, reacted to the news by claiming that the PGA Tour commissioner Jay Monahan was "copying" their homework.

The players who remain involved in the legal action are:

Where is LIV Golf Boston being played?

The tournament is being held at The International in Boston, Massachusetts.

The action will also be streamed live on their YouTube channel.

In the United Kingdom, viewers can stream it via DAZN global app.

One month costs £7.99 and you can download the DAZN app on PC, Apple, Android, Fire TV, Roku and your Smart TV.

The field has not been named yet but it is anticipated that LIV Golf will announce as many as six new signees before the Boston event.

It has been reported that Cameron Tringale, 35, who holds the record for the most amount of money won on the PGA Tour without a win ($17million), will be amongst the new signees.

Cameron Smith is alleged to have already signed a deal with LIV Golf for a reported fee north of $100million.

It is a shotgun start. The 48 players are split into 12 teams of four.

Each competitor plays his own golf ball and there will be a winner as normal.

The tournament is held over three rounds of 54 holes.

There is not cut.

What happened in the last LIV Golf tournament?

This was the field in Bedminster:

These were the teams in Bedminster:

This was the payout info from Bedminster:

And the team payout info from Bedminster: