Phil Mickelson and Dustin Johnson will tee off with Sam Horsfield in the second round of the first LIV Golf Invitational event at Centurion Golf Club. 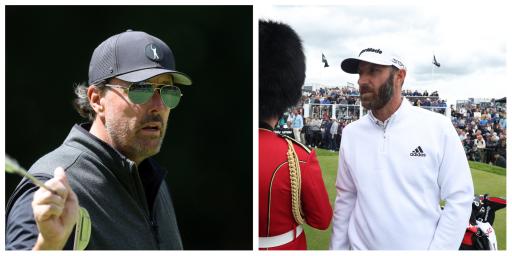 Phil Mickelson and Dustin Johnson will tee off on the 3rd hole in the second round of the LIV Golf Invitational at Centurion Golf Club near London.

Both of the Americans, who the PGA Tour has suspended, shot a 1-under 69 on Thursday at the Hertfordshire venue to sit four shots behind Charl Schwartzel.

After his opening round in which he made four birdies, Lefty declined to speak of his PGA Tour ban but did describe his enjoyment of playing competitive golf again.

"It's been a while since I played, it seemed awfully fun. The people here are terrific and it was fun to hit some good shots and get into a competitive frame of mind again. I really enjoyed it," Mickelson said.

"I drove the ball straight, that was different and nice - Anything regarding PGA Tour matters, I'm not ready to publicly discuss at this time."

Mickelson and Johnson will play with Sam Horsfield who also shot a solid score of 1-under. Only 10 players out of the 48 participants finished in the red in the first round.

The complete list of groups for the second round of the LIV Golf Invitational Series can be found below. Every player will tee off at 2.15 pm.

Next Page: Sergio Garcia happy when asked about PGA Tour bans: "It doesn't bother me"