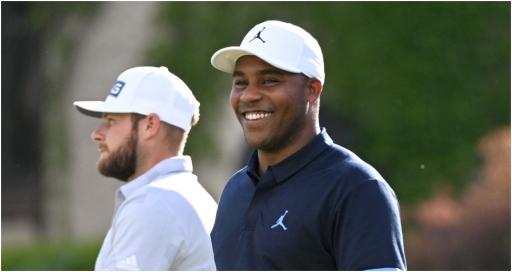 Harold Varner III admitted the golf world "got a little bit more serious" after finishing up his first round at the RBC Canadian Open but stopped short of declaring his future intentions.

Yesterday afternoon LIV Golf dropped a video on social media that featured - quite possibly - some future participants in the league.

They included images of Matthew Wolff and the injured Bubba Watson, prompting speculation they will dump the PGA Tour for the riches of the Greg Norman-led league.

Whilst Varner III was not featured in that promotional video, there has been speculation that he is likely to join the LIV Golf Invitational Series.

Varner III memorably won the Saudi International in February with a monstrous eagle putt on the 72nd hole. He had needed a waiver, like Dustin Johnson et al, to play the tournament.

All future LIV Golf players will also be subject to a suspension and professionals cannot rely on sponsor's exemptions to get into PGA Tour events.

Varner III said: "I think I've been talking about it for the last six months, just today it got a little bit more serious. I would like to keep that between the players that I've spoken to.

"I'm just sitting here just wondering was going to happen, how this is going to play out. I think it's wise to ask other people what they think. I think it would be stupid not to."

Of the PGA Tour suspensions, he said: "I think they know what they're doing. That's not my place, but I think everyone will figure out how it's really going to play out about a year from now."

Elsewhere, Varner III was in a good mood because he had an hilarious exchange with England's Tyrrell Hatton during round one at St. George's Golf & Country Club.

He was paired with Justin Thomas, too. Hatton holed out from the bunker and then Thomas drained a huge birdie putt.

Varner III said: "Tyrrell doesn't laugh a lot, so it was pretty funny to see him laugh. He's complaining the whole time, and then he holes it, so that just makes me laugh.

"Just we had a good day. It was fun. I've played with both of them quite a bit. I like to have fun, keep it light.

"When you're in threesomes, it makes it easy. Especially if one guy's not having a good day, you can at least talk to the other guy.

"Overall, we played pretty solid. Well, Tyrrell didn't, as you could tell."