Sergio Garcia happy when asked about PGA Tour bans: "It doesn't bother me" 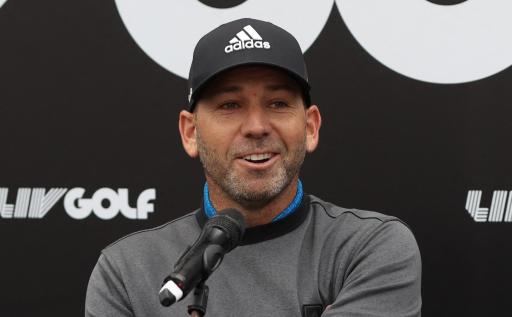 Sergio Garcia may have shot a lacklustre 1-over par in the opening round of the LIV Golf Invitational London at Centurion today, but he was certainly smirking when reporters asked him what he made of the PGA Tour's decision to ban its players for competing in LIV Golf events.

Garcia binned his PGA Tour membership two weeks ago just weeks after saying he "could not wait to leave" the PGA Tour when ranting to a rules official at the Wells Fargo Championship.

Fresh in the knowledge that PGA Tour boss Jay Monahan today confirmed hefty bans for all 17 PGA Tour players competing in the inaugural LIV Golf tournament will now happen, Garcia could not have looked any more chuffed with his decision to call time on his membership.

"It doesn't bother me, I am very happy where I am," Garcia said with a notable smirk and glint in his eye, no doubt thinking of all the Saudi millions that are about to enter his bank account.

"I am excited for this Tour, thought today was a great day to start. That's where I'm going to focus. I resigned a week and half ago, so whatever the PGA Tour says that doesn't go with me because I'm not a member. I resigned because I didn't want to get into any legal battles.

What do you make of the PGA Tour's decision to ban players? Has Sergio Garcia made the right call to resign his PGA Tour membership? Share your thoughts and comments over on the GolfMagic social media channels.

Next Page: Graeme McDowell RESIGNED from the PGA Tour just 30 minutes prior to his first round at LIV Golf event