LIV Golf: Why Greg Norman had "hate in his eyes" in this photograph

This picture of Greg Norman at the LIV Golf Invitational Series opener at Centurion Club has been doing the rounds. This is why. 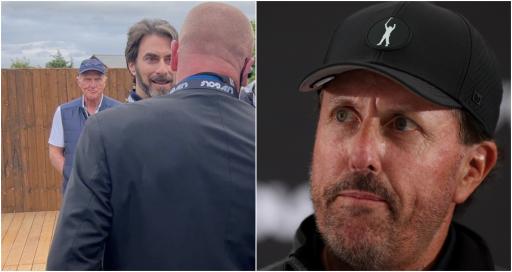 It was an eventful day at the LIV Golf opener at Centurion Club for the author who published Phil Mickelson's controverisal remarks.

Alan Shipnuck dropped a bomb on Mickelson's world back in February by publishing Lefty's comments explaining why would even consider working with the Saudis.

Of course, Mickelson later went on to claim that his comments were "off the record". Shipnuck denies this was the case.

One of the accusations levelled at Shipnuck by LIV Golf Investments CEO Greg Norman was that the writer was in cahoots with the PGA Tour.

In the Shark's opinion, there was absolutely no coincidence that just as things were gathering pace for LIV Golf, Shipnuck exposed Lefty.

"It was calculated, it's not like my 45 years in the game has left me on the outside," Norman, 72, previously told the Daily Telegraph's James Corrigan.

"I have some pretty good intel that, you, it was calculated how it came out". Still, it's fair to say there is no love lost between the two time Open champion and the author.

Things got a little bit spicy yesterday. Shipnuck flew to England to report on the tournament for The FirePit Collective. He was previously refused media credentials.

Still, that did not stop Shipnuck following Mickelson as he made his professional comeback at the richest tournament in the history of golf.

Shipnuck was later given media credentials and was reportedly in the media centre when Mickelson returned to speak to the press after the first round.

Then he posted this:

Well, a couple of neckless security dudes just physically removed me from Phil Mickelson's press conference, saying they were acting on orders from their boss, whom they refused to name. (Greg Norman? MBS? Al Capone?) Never a dull moment up in here.

Then he followed with this hilarious update:

Then we had this text exchange between Norman and Shipnuck.

You cannot make this shit up! I texted Greg Norman before someone sent me this video - I had no idea he was lurking behind me. pic.twitter.com/thgdMlfTAR

Shipnuck later told The FirePit Collective of the incident: "I have no ill will toward Phil. I just wanted to ask him one boring golf question, which is my job. Either he is being way too sensitive or the LIV folks are being too overprotective but, either way, they are overreacting."

A media official was reportedly seen apologising to Shipnuck.

Previously, an Associated Press reporter was removed from a press conference earlier in the week for "not being polite". He was later allowed back in.

Still, that picture of Norman is hilarious.

LOL the hate in his eyes