The eighth and final event of the inaugural LIV Golf season will be played at the Blue Monster at Doral and the details of this event have been published. 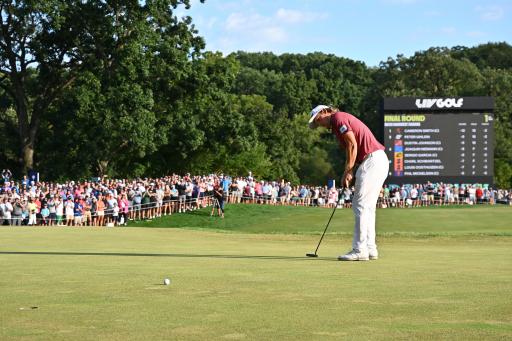 LIV Golf has revealed its unique format for the season-ending Team Championship at the Blue Monster, including singles and foursomes matchplay.

According to Bob Harig of SI.com, LIV Golf has altered its plans to a three-day event as opposed to featuring just two teams over four days. This is to satisfy the needs of an unnamed broadcaster which is set to strike a deal with the Saudi-backed series.

So far, 4 Aces has dominated the team format. The side made up of Dustin Johnson, Patrick Reed, Talor Gooch and Pat Perez has won four events in a row, accumulating $3 million each.

The announcement of the Team Championship structure comes on the same day that Phil Mickelson, Ian Poulter, Talor Gooch and Hudson Swafford have withdrawn their names from the antitrust lawsuit filed against the PGA Tour.

The final event in Miami will remain a three-day event, but the top four teams through the Jeddah Invitational will not compete until the semi-final stage on day two (October 29).

LIV just sent players information about the format of the season-ending team championship. A lot going on here:

Day one (October 28), the quarter-finals, will see teams seeded 5-12 play in matchplay fixtures. The highest-ranked teams will be able to choose their opponents and all 32 players will play among the eight teams in a shotgun start. The shotgun start has been a staple of LIV's first season.

For each team match-up, there will be three matches: two singles matches and one foursomes match. Each captain will play a singles match and decide their team's line-up.

The winner(s) of each match will receive a point and simply, the team with two points after three matches will progress to the semi-finals.

Teams seeded 1-4 come into the semi-finals on day two against the four successful teams from day one. Once again, the highest-ranked teams will select their opponents.

The teams will compete in the same format as day one: two singles matches and one foursomes match. Each match winner will get a point and the first to two points will progress to day three (October 30).

The four teams that are left will then compete in the Team Championship. It will be a shotgun start round of stroke play in which all 16 players participate in two balls.

All four scores count towards their team's score and at the conclusion of day three, the team with the lowest cumulative score will win the Team Championship.

This final event in Florida will be worth $50 million and all 12 teams receive a cut. $16 million will be rewarded to the winning team and $1 million to the 12th place team, with each prize being split four ways.