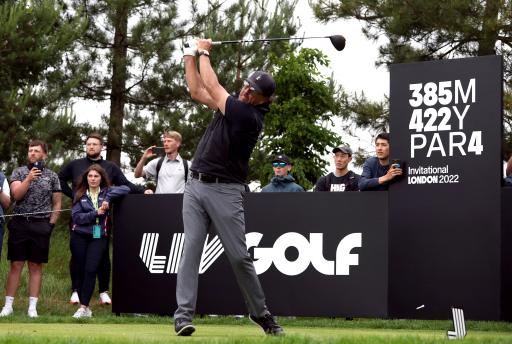 LIV Golf player Phil Mickelson has withdrawn from the antitrust lawsuit filed against the PGA Tour.

As per Daniel Rapaport of Barstool Sports, the six-time major champion has taken his name from the lawsuit which claims the PGA Tour "has employed its dominance to craft an arsenal of anticompetitive restraints to protect its long-standing monopoly."

Mickelson, 52, was one of 11 plaintiffs originally part of the lawsuit, but he has now joined Carlos Ortiz, Pat Perez, Jason Kokrak and Abraham Ancer in dropping their names from legal action.

It has also been confirmed that Talor Gooch, Hudson Swafford and Ian Poulter have withdrawn.

This leaves Bryson DeChambeau, Matt Jones and Peter Uihlein on the list, as well as LIV Golf which attached itself to the proceedings in the last few weeks.

Talor Gooch, Hudson Swafford and Ian Poulter have also pulled out of the lawsuit.

"Now that LIV is involved, it’s not necessary for me to be involved. I currently still am. I don’t know what I’m going to do, really," Mickelson said at the LIV Golf Chicago Invitational nearly two weeks ago.

"The only reason for me to stay is damages, which I don’t really want or need anything. I do think it’s important that the players have the right to play when and where they want, when and where they qualify for. And now that LIV is a part of it, that will be accomplished if and when they win."

Lefty criticised the Tour earlier this year, accusing the circuit of obnoxious greed but he also thanked it for everything it's "provided for him and his family" at the first LIV Golf Invitational near London in June.

The court case is not expected to start until 2024 and players such as Ortiz and Perez expressed their regret in joining the lawsuit in the first place. Both have since respectively admitted they "don't want any problems with the Tour" and they have "no hard feelings towards anybody."