Ashley Perez, who is married to LIV Golf Tour player Pat Perez has shared some interesting images inside their lavish home. 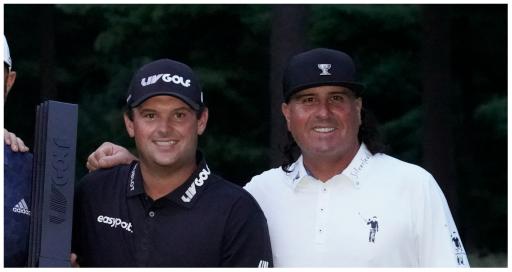 Pat Perez was one player who went back on his word to join the LIV Golf Tour and in his first press conference as a signee claimed he felt like he had won the lottery as he swatted away accusations of sportswashing.

It's fair to say things feel very confrontational in the golf world right now. There has been a lot of nastiness publicly and apparently behind-the-scenes things have been even worse if you believe reports about Sergio Garcia's alleged behaviour.

And it appears that one of golf's power couples may feel just a tad emboldened by all the criticism heading their way.

Perez's wife Ashley - who went on an all-time epic rant - to defend her man when he joined LIV, took to Instagram to give us all a sneak peek of what their home looks like.

Related: Collin Morikawa reveals which LIV pro he misses most

Take a look at how the 4 Aces legend relaxes:

That's quite something. We should point out that in absolute fairness there is some dispute about when some of the items were put into their home.

One person has pointed out that the "F--- who doesn't like this place" mats were visible when Perez gave a house tour a few years ago on a YouTube video.

In other LIV Golf Invitational Series news, the details of their season-ending team championship in Miami have now been confirmed.

LIV have reportedly made these radical changes to satisfy the needs of - at the time of writing - an unnamed broadcaster that is very close to striking a deal.

Related: Pat Perez mocks himself over lack of team contribution

Elsewhere, Phil Mickelson has confirmed that he has withdrawn his name from the antitrust lawsuit against the PGA Tour.

The news is hardly surprising, given that LIV Golf had joined the suit as a plaintiff.

Whether or not Mickelson could still be subpoenaed to give evidence remains to be seen.

The aforementioned Perez withdrew his name from legal proceedings in August, claiming that he didn't fully think his decision through and that he only put his name to the suit to back the other LIV players.

Next page: Why several PGA Tour big names are waiting to join LIV