LIV Golf Invitational Series player Carlos Ortiz has opened up on why he decided to drop out of the antitrust lawsuit against the PGA Tour. 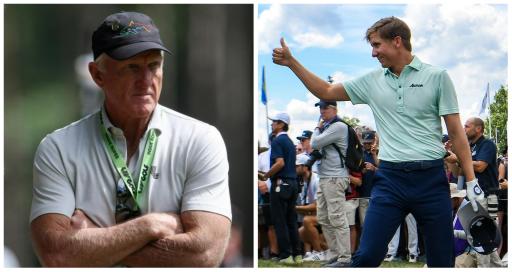 LIV Golf Invitational Series player Carlos Ortiz has followed Pat Perez in dropping out of the antitrust lawsuit against the PGA Tour.

In explaining his decision earlier in the week, Perez claimed that he didn't fully think his decision through. He just joined the lawsuit to back the LIV guys.

After Ortiz and Perez dropped out, only nine players remain. They are highlighted by the likes of Bryson DeChambeau and the de facto face of the fledgling circuit Phil Mickelson.

Ortiz, 31, has not resigned his PGA Tour membership. He has given an interview to Handicap54 where he explains his decision in full.

The Mexican, who has one victory on the American circuit which came at the Houston Open, said that once he realised that to play in the FedEx Cup Playoffs he had to be named in a lawsuit, that is when he dropped out.

"At the end of the day, I don't want to have any problems with the PGA Tour," he said.

"I'm happy where I am. I don't want to go back to the PGA Tour now. And that's why I withdrew from the lawsuit. I'm not against the PGA Tour. I wanted to play the playoffs, if possible.

"Those who were suing, they asked me, 'if there is a chance to play the playoffs, would you like to play them?' I told them that of course, I would love to play them."

So why did he drop out?

"When I realised that to play the tournaments they put me in a lawsuit, and with all the controversy that is going on, I got off, because I don't want to sue the PGA Tour.

"I qualified for the playoffs. And with the points I made in the year, I have my place in the playoffs. I'm not taking the place away from anyone."

"I love the PGA Tour and I grew up watching the PGA Tour. I even watch it now. I don't watch much golf, but if a friend is there, I'll see him. I have nothing against the PGA Tour.

"At the end of the day, I don't want any problems, I'm at peace and I'm happy at LIV Golf."

Ortiz, per the report, apparently told PGA Tour commissioner Jay Monahan that there were "no hard feelings" when he informed him of his decision to leave.

Elsewhere, Tiger Woods is said to be leading the charge against LIV Golf. He held a meeting with a group of PGA Tour players that included Rory McIlroy discuss a pathway forward for the Tour before the BMW Championship.

Read the details of that here.

Next page: Rory McIlroy fuming with fan at BMW Championship