Phil Mickelson, Bryson DeChambeau and nine other LIV Golf players have filed an antitrust lawsuit against the PGA Tour, challenging their suspensions. 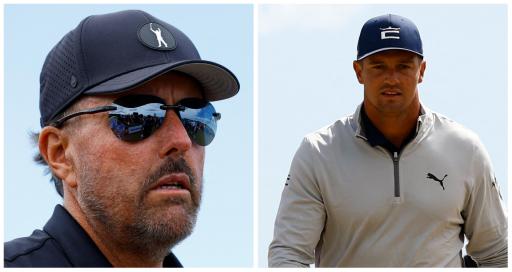 Phil Mickelson, Bryson DeChambeau and nine other LIV Golf players have filed an antitrust lawsuit against the PGA Tour.

You can read a full copy of the lawsuit here.

Per the report, the court documents - which are 105 pages long - also contain the bombshell that Mickelson was suspended by the Tour on 22 March.

This was for allegedly "recruiting" players to LIV Golf. Mickelson has consistently refused to talk about this subject in press conferences.

What does the lawsuit actually say?

"As the Tour's monopoly power has grown, it has employed its dominance to craft an arsenal of anticompetitive restraints to protect its long-standing monopoly.

"Now, threatened by the entry of LIV Golf, Inc and diametrically opposed to its founding mission, the Tour has ventured to harm the careers and livelihoods of any golfers, including Plaintiffs Phil Mickelson, Talor Gooch, Hudson Swafford, Matt Jones, Bryson DeChambeau, Abraham Ancer, Carlos Ortiz, Ian Poulter, Pat Perez, Jason Kokrak, and Peter Uihlein, who have the temerity to defy the Tour and play in tournaments sponsored by the new entrant.

"The Tour has done so in an intentional and relentless effort to crush nascent competition before it threatens the Tour's monopoly."

More: Greg Norman with another own-goal in Fox News interview

This news essentially represents the beginnings of a highly-anticipated, protracted legal fight about the future of professional golf.

Mickelson is seen as the de facto face of the LIV Golf Invitational Series, which launched in June.

Lefty was forced to exile himself from public life in February after his comments about working with the Saudi-backed LIV Golf were made public.

Mickelson's comments, published in The FirePit Collective, sparked outrage in the golf world.

The six-time major champion, 46, claimed the Saudis were "scary motherf***ers" and "we know they killed Jamal [Khashoggi]."

Mickelson further admitted that he wasn't sure if he wanted the LIV Golf series to succeed as he wanted to use the enterprise as leverage against the PGA Tour.

His comments, that he claimed were made "off record", followed public criticisms of the PGA Tour.

Mickelson claimed the PGA Tour was hoarding players' money with his famous remarks about "obnoxious greed".

He returned to professional golf in June at the first LIV Golf event at Centurion Club.

His deal is reportedly worth $200million. Several other LIV players have signed multi-year deals worth millions of dollars.

DeChambeau, in particular, recently claimed that he "personally knows" that golf's civil war would end soon.

The PGA Tour suspended the players, known as "the Saudi rebels" 30 minutes after the first tee shots were hit in LIV's opening event.

Some players, such as Dustin Johnson, have resigned their PGA Tour memberships to avoid litigation.

While others appear ready to fight the PGA Tour in court. Critics argue that these players want to have their cake and eat it.

Some LIV players have hit back, claiming that as independent contractors they have the right to play wherever they want.