Padraig Harrington: LIV Golf players have "made their bed, now lie in it"

Padraig Harrington gives his thoughts on the current situation regarding LIV Golf at the Horizon Irish Open. 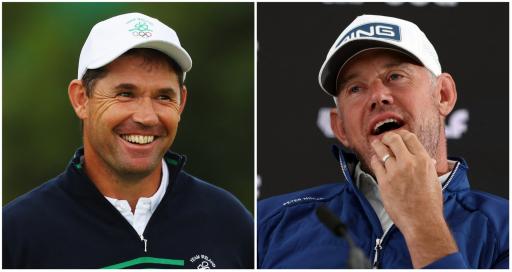 We’re fairly certain former Ryder Cup captain Padraig Harrington would rather be asked about anything else other than LIV Golf as he competes in his home open on the DP World Tour.

Yet even when he was asked about it, the home favourite at the Horizon Irish Open didn’t mince his words at all when asked about the players who have jumped over to the LIV Golf Invitational series.

It is no surprise that Harrington, 50, who has won 15 times on the European Tour and three majors in his enterprising career that he would have a strong opinion.

Yet he had one message to the LIVers that include Sergio Garcia, Ian Poulter, Graeme McDowel, Lee Westwood and Martin Kaymer: You have made your bed. Now lie in it.

"It was very, very clear that there would be severe sanctions for anybody who went," he said.

"But I honestly don't judge the guys who went for the money. It's a pretty good offer.

“Certainly, if you turn around and they offer you that sort of money and, bear in mind, people at times are looking at the moral side of it, everybody has different morals depending what country you come from, what religion.

"There are so many different things. I don't know why we would impose. They have gone and happy to have gone, fair play to them.

“There's certainly room in golf, the rest of golf has started to prove, based on that tournament. I'm particularly happy that the European Tour and the PGA Tour have come out and started focusing on themselves to get better, instead of trying to pull down the other Tour.

"I wouldn't sanction them as far as letting them play in the Majors, if it was me. I don't have a problem with that. I see it as a competitive Tour.

“I grew up seeing the PGA Tour as a competitive Tour. I don't have a problem with another Tour being out there competitively.

"The players who have gone, that was their choice and they knew what was coming. To be honest, most of the players on this side will think that the sanctions are too light, way too light, so the players would be wanting more. And they are friends, we are all friends, like we know each other."

“I actually don’t have any problem with the guys who have gone to LIV Golf. But you make your bed and you sleep in it.”

Padraig Harrington gives his views on the rebel players who have threatened the DP World Tour with legal action. #RTEGolf pic.twitter.com/A2zOC5DyP1

Harrington, when speaking the media after claiming his maiden senior major on debut, also spoke about the LIV Golf players who have not decided to jump ship.

He feels that they do not get enough credit.

However, it’s clear that Harrington believes that there is room in golf for LIV.

“I've always said that. I thought there was room for PGL and I think there's room for them in golf,” he added.